Dirty Dino: The T-Rex taking the Dirty Birds and FGCU Athletics by storm 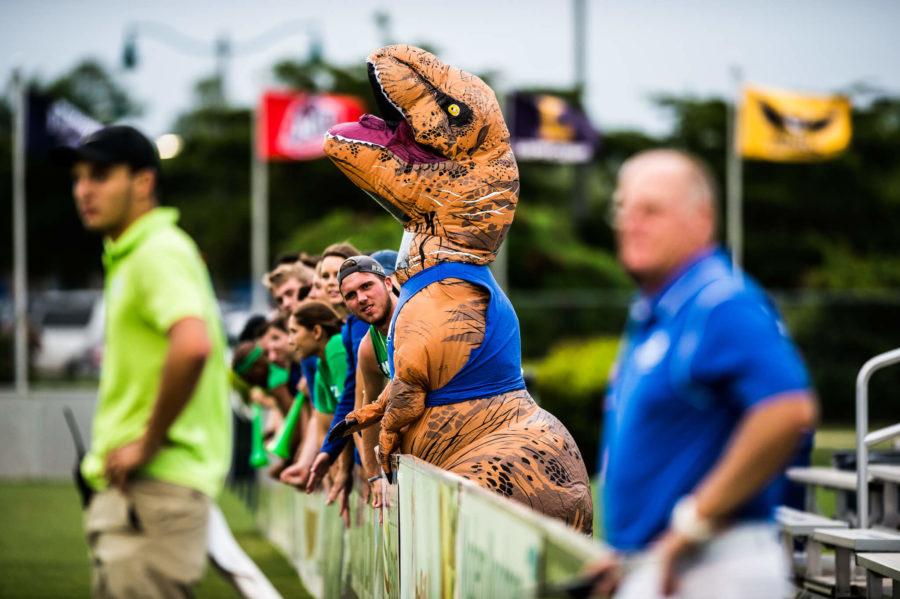 If you thought dinosaurs were extinct, think again. A new breed of dinosaur now roams the fields and courts of FGCU, Daniel the Dirty Dino. A transfer from Ohio, this dinosaur has become the new face of FGCU Athletics.

“There’s really no reason why I do it. I gave it the name Daniel because that’s my middle name. I saw the suit on Amazon and enjoyed the student section at my high school, so I thought I’d try it down in Florida,” said Chase Jackson, “the Dirty Dino.”

Unaware of the popularity the suit would get, Daniel’s local fame took off after attending almost every home game thus far. However, with a costume malfunction in the beginning of the sports season, the dinosaur had to take a few games off.

“I want to try and go to every home game this year. However, someone ripped my suit at a soccer game in the armpit and after patching it up so many times, I had to take a few games off while I waited for my new suit to come in.”

However, this new passion comes  with quite a price.

Though the suit is crazy, it provides the mysterious man with very little movement. Standing at a tall 6-foot-2-inches, the suit fits snuggly, giving the wearer limited visibility.

“The suit is very hard to move in, so I can’t get too crazy,” Jackson said. “I have to keep my arms crunched up and by my sides and can’t really see out of it because I’m too tall for the suit.”

Quickly becoming an icon, Daniel the Dirty Dino is giving Azul a run for his money. With hits on nearly every FGCU Athletics fan page, the dino has made quite the impact on almost every sport thus far, especially FGCU volleyball.

In an interview after a home volleyball match, head coach Matt Botsford said, “That dinosaur has made my night. Getting a win is great, but that dinosaur is phenomenal. I hope whoever that is continues to come back every time because the student section has been wonderful. We haven’t seen this kind of support since I’ve been here. The energy in here is great, and they play a big role.”

With greater impact than the student could ever imagine, Jackson hopes to continue this recently-born legacy.

“This is a very new thing, but I hope to continue it the next three years I have here at FGCU.”