Love is in the air: Brooke’s Legacy hosts adoption event in Naples 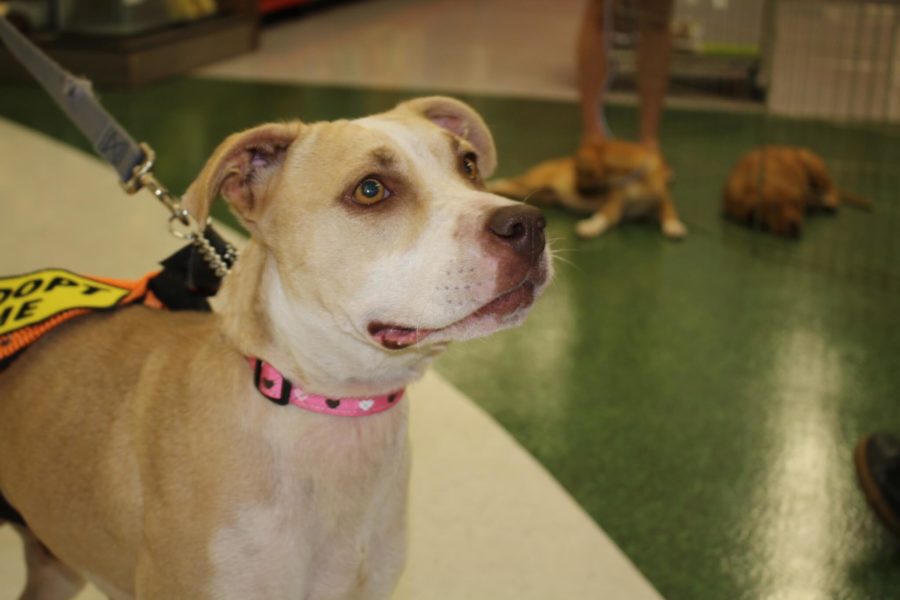 Patrons were all smiles this passing Saturday when Brooke’s Legacy hosted their weekly adoption event held at the Petco on Naples Blvd, from 11 a.m. to 3 p.m.
Guests were energetic and excited as they gathered to meet their future companions. From the moment any person stepped through the sliding doors of Petco, they fell in love with the puppies that were rolling around in their play pen – one of the most popular sections of the store. From there, guests got to meet all of the other wonderful animals that were present, which included an American Eskimo dog–named Fred Frosty because of his long white fur– to the petite and loving Kelly Ann, who was constantly wagging her tail at people who approached her.
Accompanying the pets were volunteers for the organization, all of whom were helpful and proved to know the animals very well. They could easily help find a pet that would most accurately fit a guests’ personality and lifestyle. The best part was that most of these volunteers were fosters so they already knew what these pets were like in a home environment and could easily give all the information needed to pair them with a forever family.
Two fosters that were present were Tim and Jessica, a father and daughter duo who were in charge of Kelly Sue and Kelly Ann. Jessica, who was very young, proved that it’s never too early to make a positive impact in the community and bring light to the lives of the animals.
Fellow FGCU student Markssa Diefenthaler, helped out in the adoption event as a volunteer. Diefenthaler, a history major who is graduating this year, spoke about her experience with Brooke’s Legacy.
“I actually knew Brooke. So I knew who the organization was named after,” said Diefenthaler.“I’ve been involved with them for a long time, but have (only) been an active volunteer for about a year.”


“Really it’s just so rewarding to come here every week and find a family for these guys.”
At the event, Diefenthaler sat with Saving Simon, a little tan dog that had only one eye. “Like this one,” she said, “(He) just sits on my lap for hours.”
Another volunteer was Jackie Morsom, a volunteer that often dedicated hours of her time to the organization.
“I volunteer every Saturday and almost every Sunday,” says Morison, “Once we get to October, we do an event at the Farmer’s Market in Pine Ridge Road every Sunday. So with the three or four girls that are here all the time, we’ll switch on and off.”
Morso is not only an active volunteer, but also a foster to many of the animals.
“One of the best things is when you go to the adoption events and you see the dogs. I see them when they first come to us. They’re scared. They’re nervous. So, to see them kind of work through that and get adopted into a home is great. Often times, they’ll come back to visit and it’s like the best thing ever to see how happy they are.”

As a rescue organization that is purely foster-based, Brooke’s Legacy will, at times, struggle to find enough people to help foster all of the animals. Although they can keep many of the cats at the Petco cat condos, finding the temporary care for the rescue dogs can prove to be a challenge.
“We don’t have a shelter. So, we are all foster-based. Sometimes we might lose a foster or they go out of town, so we have to adjust accordingly to the number of fosters we have and the number of dogs.” Morson explains how difficult it can be in certain moments.
“Sometimes people have to double up on foster dogs or whatever depending on the situation… We get calls sometimes for pets, that may come from a hoarding case in Lee County, and it could be over 100 pets. So, we just try to take in as many as we can.”
Volunteers are incredibly important to Brooke’s Legacy, which is a completely non-profit organization. They have no paid staff and depend on the help of their volunteers.
“Everybody that you see, that’s what the rescue is, it’s volunteers. They don’t get paid. So, we don’t have any national budget. We don’t have any county funding. We are entirely funded off of donations made by private citizens, groups, or once in a while we’re lucky enough to get a grant.”

According to Morson, part of being a volunteer is also gathering animals that are rescued from death row at kill shelters.
“We go into the shelters and save the dogs and cats who are soon to be euthanized. Most of the time it’s for no other reason than they just ran out of space, or maybe they’re a little scared. You know what I mean? But what dog wouldn’t be scared in a shelter?” she asks, “We’ve had plenty of dogs that the shelters will say ‘Oh they’re fearful. They’re scared. They’re aggressive.’ But, once you get them out of the shelter and into a foster home they’re entirely different.”
Volunteer jobs can range from helping, to hosting adoption events, to simply helping transport these animals from place to place. Some can help by doing dog food drives–a consistent need in the community– and others can help by fostering.
“If you want to volunteer, it’s a great idea to come to one of the events. Come meet us, see the dogs and cats, and see if you like it. We should have the volunteer paperwork on us. Then just let us let us know when you’re coming,” said Morson.
It’s true that the work of a volunteer at a rescue organization can be stressful at times, but it’s never in vain. Several pets were happily adopted on Saturday, one being a small female puppy who was adopted by a young girl, named Sophia, and her family. The two looked very happy together as Sophia tried to find a name that would fit the new member of her family.
Delete Image
Align Left
Align Center
Align Right
Align Left
Align Center
Delete Heading