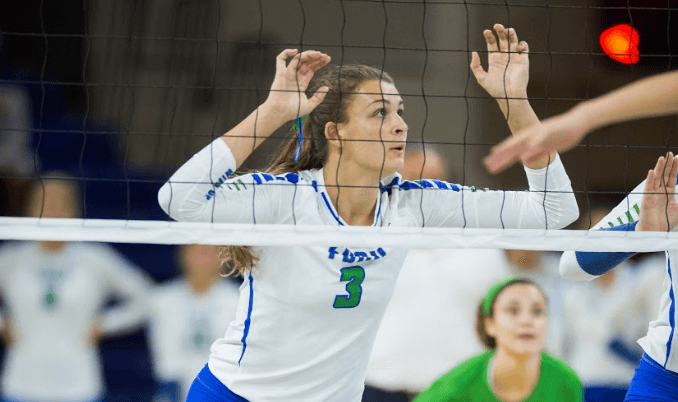 On Saturday, FGCU remained undefeated in the Owl Classic when the Eagles claimed another tournament win against Texas-Rio Grande Valley.
FGCU swept the match by winning the first three sets [25-15, 27-25, 27-25]. Amanda Carroll, who was named MVP of the Owls Classic, attained 21 kills and, overall, the Eagles recorded 52 kills throughout the match. UTRGV recorded 38 kills.
The first set opened up with a kill from Carroll, and gave FGCU the immediate lead. Throughout the set, FGCU remained in the lead.
This set saw consistent serving along with relentless offense from the Eagles, and Maggie Rick’s service ace pulled FGCU to a 10-point lead, 24-14.
UTRGV added one more point to their score, but Carroll answered with a winning kill to end set one in FGCU’s favor, 25-15.
UTRGV got a jump start on the Eagles by scoring the first point, but following that, the Eagles racked up the more points with big kills from the offense.
This set was different from the first, as UTRGV worked at a competitive level, matching FGCU’s points as they scored them.
It was all tied at 23-all, and points were exchanged until the set went into extra points, but Leigh Pudwill’s kill ended set two with another set win for the Eagles, 27-25.
The third set started with the Eagles and UTRGV exchanging points.
Strong kills from Karissa Rhoades, Giovanna Borgiotti and Carroll contributed to FGCU’s lead throughout the set.
At the end of the set, the Eagles were down 25-24, but they came back to win the next three points, two of those points from Carroll’s kills, to claim the match in three sets, 27-25, and making them 3-0 in the tournament.