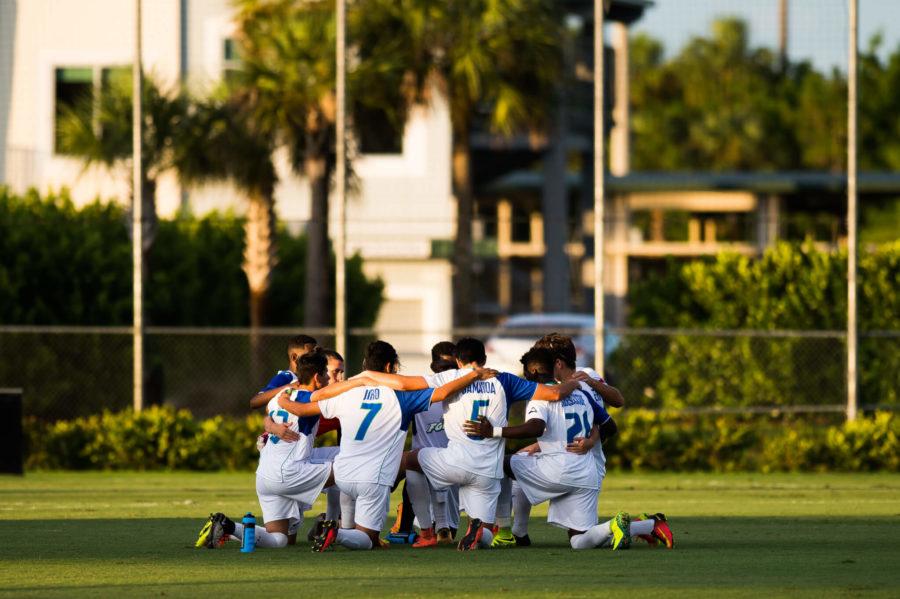 After defeating UNCW 5-0 on Saturday, the FGCU men’s soccer team put five goals in the back of the net once again, defeating FAU 5-1.

“We got some good chances, and we’ve had some good locks,” head coach Bob Butehorn said. “We know some difficult roads are ahead, so we can’t build too much on it.”

Arion Sobers-Assue led the way for the Eagles in the goals column, netting his hat trick with a goal off of a shot on goal by Shak Adams in the 60th minute.

“I’ve been waiting for moments like this for a while,” Sobers-Assue said. “After my injury, I was kind of down. But, now, I get to play with my family, and it feels amazing.”

The numbers in the stats sheet translated onto the pitch in the first half, as the Eagles led every offensive category while maintaining the bulk of possession, dominating the Owls in the first half.

In the 30th minute, Sobers-Assue put the Eagles ahead after he buried the ball in the back of the net after Jiro Barriga Toyama had his shot saved.

Moments later, Sobers-Assue was on the board once again after dancing past the defense, ripping a shot past the goalkeeper’s right to give the Eagles a 2-0 lead.

In the dying moments of the first half, Albert Ruiz made history, scoring his eighth goal of the season assisted by Robert Ferrer, breaking the program record for goals in a single season.

“To be honest, I wanted to get it done today,” Ruiz said. “It was hard to focus after my teammates told me about the record, but now, I can focus 100 percent on my team and conference play.”

At the end of the half, FGCU led FAU 3-0 thanks to two goals by Sobers-Assue and a record breaking goal for Ruiz.

After giving up a goal in the first five minutes of the second half to FAU, FGCU quickly regained its three-goal lead after Sobers-Assue found the back of the net once again to earn a hat trick.

Tempers began to flare in the final 20 minutes of the half as frustration grew for FAU, as it was unable to unnerve the Eagles’ backline to earn a second goal.

Santiago Ortiz capped off FGCU’s fifth consecutive win, scoring a free kick goal from about 20 yards out by bending the ball against the wall into the back of the net with three minutes remaining in the match.

The Eagles will now travel to Union, New Jersey to kick off Atlantic Sun Conference play against NJIT.