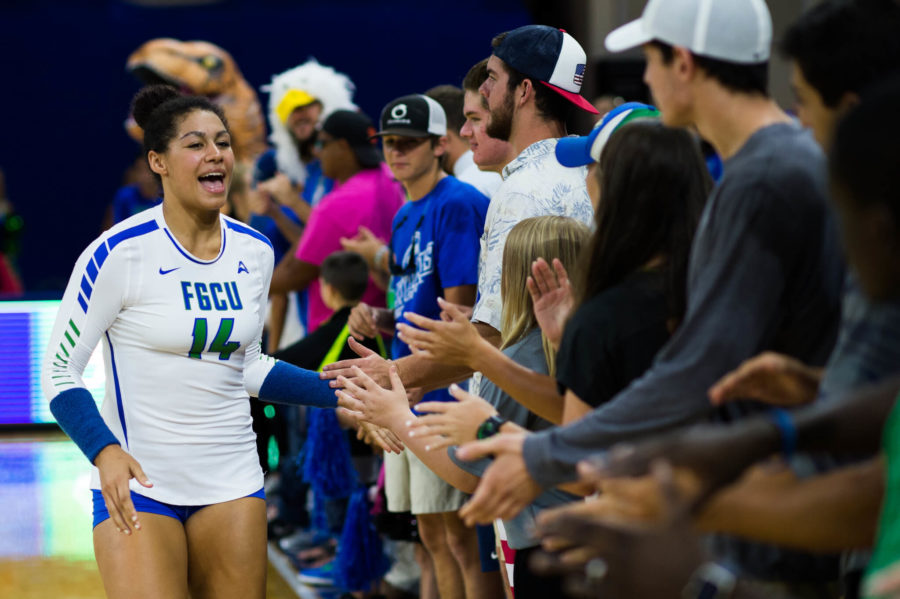 The Eagles lost the first set when FIU put up a big block and FGCU had holes in the defense, but the next three sets, FGCU dominated with a versatile offense with 60 kills compared to FIU’s 43 kills.

In the first set, Amanda Carroll pounded a cross court kill followed by an FIU error to give an advantage to the Eagles, but following that short-lived lead, FGCU spent the rest of the set trying to catch up to FIU.

FIU’s offense pounded on the Eagle’s defense, and the Panther’s defense put up a big block. After a close comeback from the Eagles, FIU claimed the first set ending with a kill, 25-23.

The second set started with a lead from the Eagles, forcing FIU to take an early timeout at 5-1.

FGCU had to change up strategy to keep the lead by putting up a stronger block and swinging over FIU’s block and tipping to take a seven-point lead, 18-11. A kill from Marlene Moeller followed by an FIU error ended set two in FGCU’s favor, 25-14.

The third set started off neck and neck, but the Eagles took the lead when Moeller added another kill, forcing the Panthers to take a time at 10-5.

A tip kill from Maggie Rick took FGCU to an eight- point lead, 14-6.

FIU worked to make a comeback but fell short when FGCU claimed the set victory with a back row attack and kill from Carroll, 25-20.

In the fourth set, FGCU and FIU exchanged the lead point for point.

A kill from Carroll in the back row gave FGCU its first definite lead at 14-10.

An overpass from FIU was answered with a kill from  Karissa Rhoades, forcing a FIU timeout at 20-13 FGCU up.

A kill from Carroll followed by an error from FIU ended the match in favor of FGCU, 25-20.