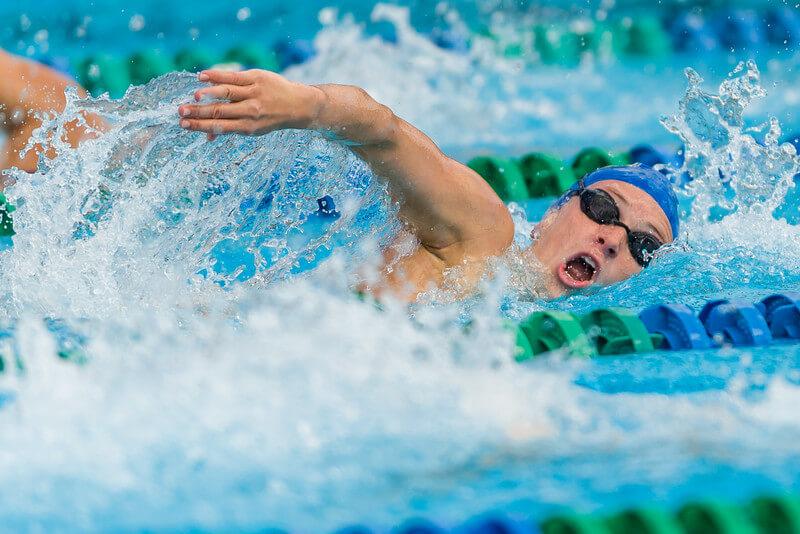 After a long, three-day invitational, The FGCU swimming and diving team finished third overall at the All Florida Invitational hosted at the Nova Southeastern Aquatic Center.
“Overall, the team did a great job this weekend,” FGCU Head Coach Dave Rollins said in a recent FGCU Athletics press release. “This early in the season, we have been focused on building our base and getting into shape. It was apparent in our racing details. We will focus on building from here and sharpening our race strategy and details.”
FGCU won the first event of the meet on Friday with the 200 freestyle relay. They defeated the University of Florida by less than a second with a time of 1:34.44 and also qualifyed for a NCAA “B” cut.
Continuing to add to the Eagles’ strong first day, Barbara Caraballo showed her skills by finishing second in the 200 individual medley with a time of 2:04.70, while earning herself an NCAA “B” cut. Shortly after, Katie Latham touched third in the fast-paced 50 yard freestyle with a time of 24.09.
FGCU had a strong finish to Friday, when they placed second and third in the 400 medley relay respectively, with times of 3:54.16 and 3:54.28.
FGCU had a good start to the second day of the meet, getting second and an NCAA “B” cut in the 200 medley relay with a time of 1:43.75. They were out-touched by the University of Florida by less than half of a second.
In the 100 yard butterfly, FGCU saw two of their swimmers place in the top three, with Christina Kaas Elmgreen finishing second with a time of 56.39 in a very exciting race when she missed the first place victory by only .13 seconds. Yee Ching Wong finished right behind her in third place with a time of 56.47.
Hannah Burdge continued Saturday’s success with another NCAA “B” cut and a second-place finish in the 200 yard freestyle with a time of 1:53.08. That was another close second place finish for the Eagles. Burdge was out-touched by .04 seconds.
Evita Leter gave the Eagles their first victory of day two with a first-place finish in the 100 yard breaststroke with a time of 1:05.16.
The Eagles ended Saturday on a high note with a third-place finish in the long 800 free relay with a NCAA “B” cut time of 7:38.78.
Sunday, the final day of the swim meet, FGCU decided to not to swim the final session after swimming the preliminaries Sunday morning.
The final standings saw the Eagles finish in third with 692 points behind Miami (744 points) and the winners of the All Florida Invitational, Florida (1076 points).
After hosting their annual Green/Blue, scrimmage Oct. 1, the Eagles welcome a handful of top 25 teams to the FGCU Aquatics Complex as they host the FGCU invite Oct. 7 and 8.