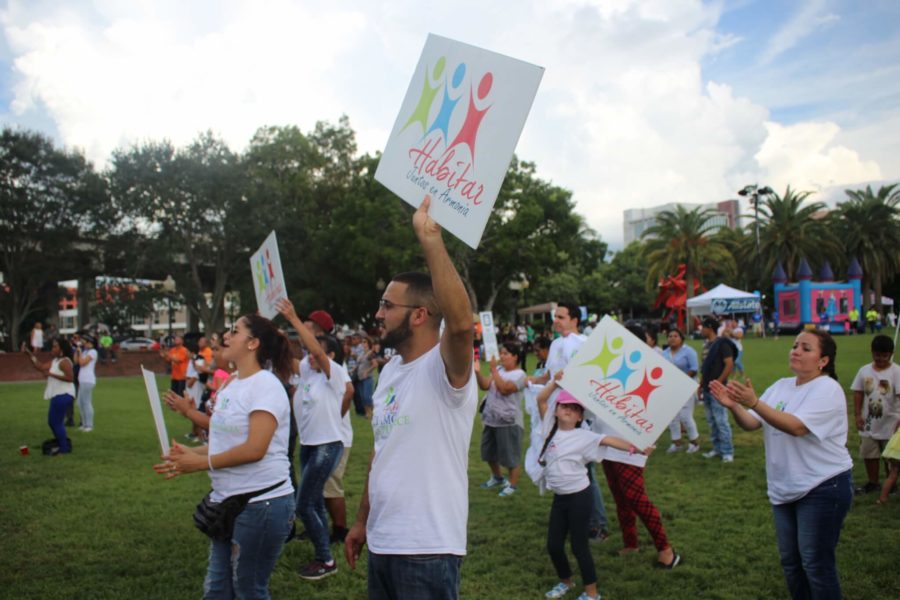 Thousands of people were present at the Hispanic Heritage  Festival on Sept. 24 at Centennial Park in Fort Myers, where they were able to share their culture through  music, food and activities.

The festival, which was held in celebration of Hispanic Heritage Month and in honor of all the Hispanic generations in Southwest Florida, was open to people of all races and brought both diversity and cultural knowledge.

“I love it,” said Mayela Rosales of Executive Vice President of Univision SWFL. “It’s a great opportunity for the Hispanic community to come together and enjoy the day.”

According to Rosales, the festival is a Christ-based event where people of Christian religions come together and celebrate their culture with a marketplace where, more than 45 vendors sold their products. There were tents of a multitude of nationalities: Venezuelan, Mexican and more.

Rosales was situated in a Univision tent along with the rest of her crew as she helped run the event which was sponsored by Univision and many others including Election Vendors, and ACT.

Manny Montes, a reggaeton musician, took the stage preparing to sing his next song.

“Believe in the process of life because God will guide you,” Montes said to the crowd.

“This next song that I will sing speaks of something similar. Many times, we tend to complain. I don’t know if this happens here but in Puerto Rico we complain about how bad our situation is and forget how good we have it,” Montes said.

Montes finished his speech and began his song as the crowd danced and cheered.

“So just be grateful because God has everything under control,” Montes said before he continued his song and invited several kids on stage to engage in a rap battle with him.

Among the crowd were members of an organization called Habitar Juntos en Armonia, a Catholic organization who were advertising their upcoming event called Clamour in his Presence as well as visitor J.R. Pagan who promoted his own event called the Shadow Tree of Life.

Though both groups were promoting their own events, they remarked that the Hispanic Heritage Festival was something that they attended each year with their families, not only to enjoy themselves, but also to reconnect with the communities.

“This festival is amazing because it is something that has been planned out for many years and in that time it has grown so much. There’s so many different activities that have been and will continue to be added on with the passing time,” said Pagan.

Pagan reflected on the first time he arrived in the states.

“When I first got here there were maybe seven- to 8,000 Hispanics (in the area),” Pagan said. “Now, there are over 200. Little by little it is becoming a great Hispanic metropolis.”

The Hispanic Heritage Festival helped contribute to that metropolis by bringing people together to celebrate their heritage with pride.