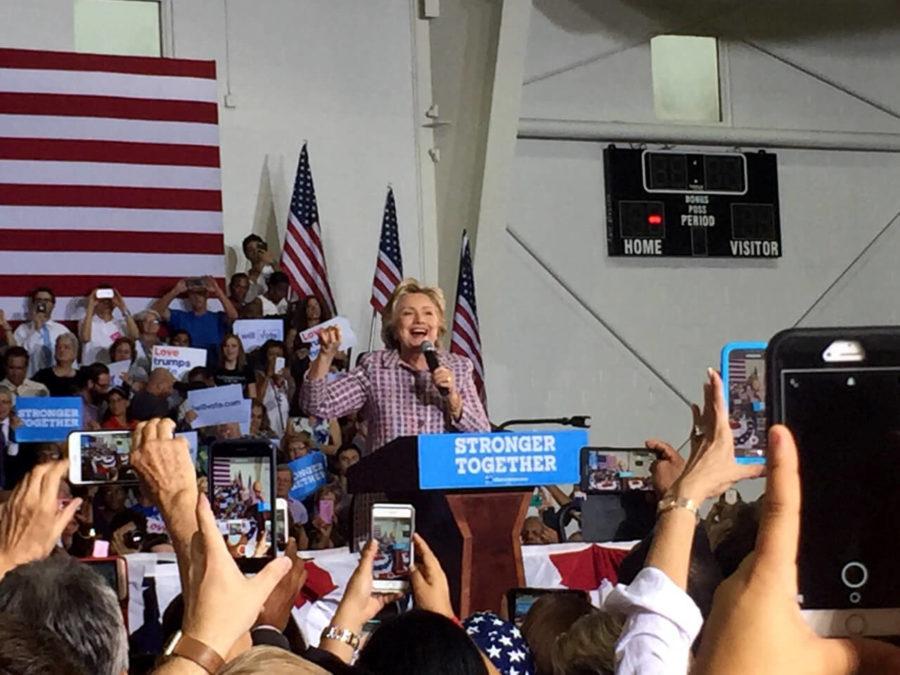 From Friday morning to afternoon, the streets of historic downtown Fort Pierce were blocked off for the supporters who came out to see the woman they call “Madam President” — that is, presidential candidate Sec. Hillary Clinton.
The crowd waited in the blistering heat, some sharing the stash of water bottles they’d brought with total strangers in line near them. The majority chatted amongst themselves at a dull roar, but the sound became deafening when opposing candidate Donald Trump’s supporters arrived with Trump flags, Make America Great Again banners and handmade “Hillary for jail” signs.
Boasting 1,200 seats, Sunrise Theater quickly reached capacity, but tensions only rose further once the doors were shut on the several hundred who didn’t make the main or overflow rooms in time.
From across the narrow, cobblestone road, pro-Trump protestors began to chant “Trump” louder at the disappointed Clinton supporters. Fort Pierce police officers stood and milled around in the intersection between the two groups to keep the peace.
Meanwhile, inside, a series of speakers would soon take the stage to begin Clinton’s first of two South Florida events Friday.
“St. Lucie County — who would’ve thought?” said Rep. Larry Lee Jr., D-Port Saint Lucie. “Two visits by the vice president of the United States, (Joe) Biden; visits by President (Barack) Obama, not once but twice; and now, a visit by (Sec.) Clinton and our next president, Hillary Clinton.”
Lee shared that both Clinton and Trump had been invited to come take a look at the troubled waterways in South Florida post-Okeechobee releases, but he only received response from Clinton, who sent former EPA administrator Carol Browner down to take a closer look.
“Hillary Clinton understands clean water is not a luxury; it’s a fundamental right,” Lee said. “Every American, regardless of zip code, deserves clean water to drink, safe beaches to swim in and safe waterways to fish.”
Rep. Lois Frankel, D-West Palm Beach, opened by quoting jabs at Trump made by members of his own party, including Ted Cruz’s list of adjectives for him as well as Marco Rubio’s “small hands” comment, but she soon gained her composure.
“This is no laughing matter because you know what’s at stake: our daughters’ access to full healthcare — in fact, all people’s access to healthcare; reducing carbon in our atmosphere to preserve our planet for future generations; building bridges, not walls; passing commonsense gun legislation; fair criminal justice laws and an economy that works for everyone not just a few. And, how about that little thing called peace on earth?” Frankel said. “As I said, there’s a lot at stake here.”
Clinton approached the podium emblazoned with “stronger together” an hour into the rally, after a half-hour break following the speakers, and spoke for the next half hour on subjects ranging from the difference between her and her opponent, and what she feels really makes America great.
“(Trump) stood on that stage — at his convention — and described a hopeless, broken nation,” Clinton said to the crowd. “I’m sorry. I’m looking at you; I don’t see that. That, in no way, resembles the strong, vibrant America I know.”
Clinton’s speech, in large part, focused on inclusion of the rally goers, utilizing second person grammatically throughout.
“He said, ‘I alone can fix it,’” Clinton said. “I alone? Well, we learned that’s his way — one person getting supreme power and exercising it ruthlessly. That’s why he admires dictators like Vladimir Putin so much, but that is not how change happens in America.”
The crowd, which had cheered and booed accordingly up until that point, made a collective, strained noise when Putin was mentioned.
“I talk a lot about how America is an exceptional nation,” Clinton said. “We’re not exceptionable just because of the size of our military or the size of our economy. We’re exceptional because of the generosity and ingenuity of our people.”
The crowd, once again, erupted in applause.