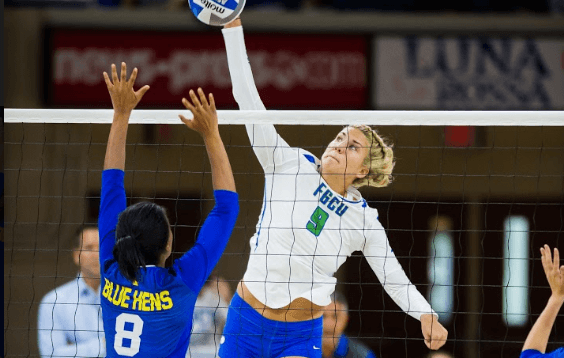 With not the prettiest of wins, but a win nonetheless, the FGCU volleyball team come out on top against NJIT at home, 3-0. This marks the 14th consecutive win for FGCU and sets the second most win streak in the nation behind No. 1, Nebraska, who has 28 consecutive wins.
In warm ups, something seemed a little off with the absence of key player, Amanda Carroll. Carroll was suited up to play, but sat out the entire game. Freshman, Giovanna Borgiotti filled in for the veteran, playing well under pressure, tallying up six kills.
“We’re just dealing with injury issues right now,” said head coach Matt Botsford. “We’re still not sure how that’s going to play out, but for the time being she’s going to be sitting out.”
Starting the first set the Eagles seemed to have a comfortable four-point lead, but after two consecutive service errors and bad ball handling, FGCU quickly lost their lead.
After a timeout, the Eagles and Highlanders went back and forth before NJIT took a timeout with the score favoring FGCU, 23-19. Yet, FGCU took the first set 20-25 with Leigh Pudwill leading in attacks and kills [7 kills, 11 attacks].
“I thought we served great and that, ultimately, was probably the difference,” FGCU head coach, Matt Botsford, said. “We put a lot of pressure on NJIT from the service line, but we were pretty careless outside of that, our ball handling, our attacking decisions, blocking.”
After a slight score mess-up, the Eagles led 17-13, but the Highlanders came back to tie the set 22-22. In the end, FGCU came back to win the set 25-23, as Pudwill continued to lead the team with overall kills.
“It’s nice to get a win, but that’s definitely not the type of volleyball we are used to playing,” said Leigh Pudwill. “We were doing pretty well in walk-throughs today, but we just kind of got in our heads. Tonight was a big wake up call for us and tomorrow hopefully we’re going to gel a little bit better.”
In the final set of the night, play was back to back, until the Eagles took advantage of NJIT errors making it 11-18, in favor of FGCU.
NJIT began fighting back too late in the third set and couldn’t finish, allowing FGCU to come out with their 14th consecutive win, 25-17.
Tomorrow night the Eagles welcome USC Upstate for their second consecutive Atlantic Sun Conference matchup at Alico Arena, Saturday, Oct. 1 at 7 p.m.