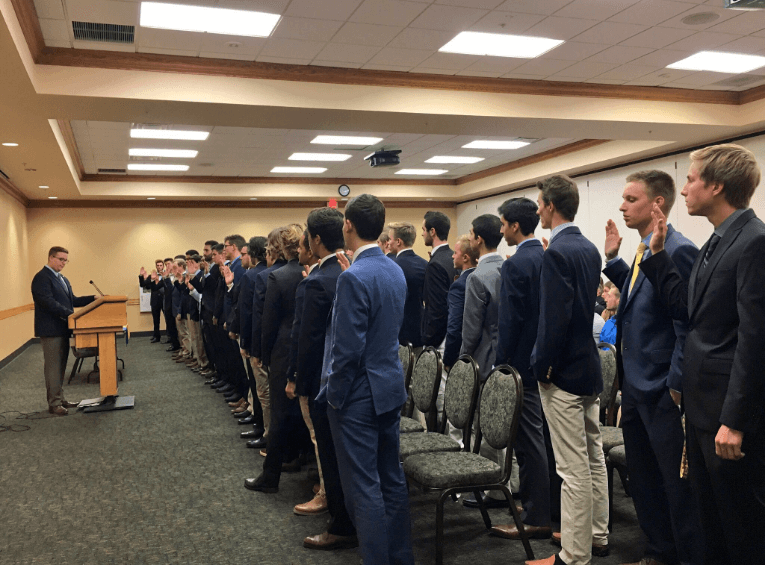 Alpha Tau Omega held its inaugural formal colony establishment ceremony Saturday, Oct. 8 in the Cohen Center ballroom. Roughly 76 founding fathers were inducted into FGCU’s newest fraternity.
ATO is FGCU’s first fraternity founded on Judeo-Christian beliefs. This contrasts most Greek fraternities on campus, but welcomes new brothers of all walks of life.
Director of Growth, RJ Taylor, began the ceremony by formally welcoming the inductees. Each new member was required to raise their right hands and swear into ATO with a recitation of the principals of the fraternity.
“It’s just giving a group of men on campus another home,” Taylor said about ATO’s planned impact at FGCU. “[ATO provides] the opportunity to create something that’s just a little different, and to be able to be involved and support other organizations in the Fort Myers community that maybe aren’t currently being reached.”
National representatives of ATO then endowed each new member with a pin showcasing the fraternity’s logo. The representatives recited a code of honor to each member as they were pinned.
Taylor then handed over the official ATO gavel to colony president Dominick Chicago as he was sworn into the position followed by each officer of the new colony.
FGCU assistant director of student involvement, Travis Smith, gave a word of encouragement to the colony members, followed by Kappa Delta president Catie Evans and Chi Omega president.
After the official induction, each of the 76 founding fathers were given the opportunity one-by-one to share their thanks and ambitions for the new ATO colony. Every one gave a shout-out to National Leadership Consultants, Kyle Stepp and Hans Rico, for reaching out to them and helping create the chapter at FGCU.
“ATO does not have a philanthropy,” Rico said in an earlier interview with Eagle News. “We believe that the chapter should help a cause that is important to them. For example, if a brother’s mom has breast cancer, the chapter is able to hold an event for breast cancer.”
Each statement was concluded with the phrase “much love and respect to my brothers.”
“The coolest thing about ATO is that it breaks all the stereotypes that exist in FGCU,” founding father Luke Autera said. “I know that I would never have seen myself joining a fraternity just because of the men I’ve seen that represent those organization, and these guys are completely different.”
According to Taylor, ATO prides itself on being a fraternity not based in philanthropy, but on community.
“The goal for ATO is not to be America’s leadership fraternity,” Taylor said. “It’s a leadership organization that brings men together that just want to live better and be better than they were yesterday.”
ATO is recognized as an official fraternity of FGCU, but must go through a petition process to become a nationally recognized chapter. The petition process takes 12-16 months.
Otis Allan Glazebrook, Erskine Mayo Ross and Alfred Marshall established ATO at the Virginia Military Institute in 1865. Historically, the fraternity has ties to helping efforts after the Civil War in 1865.
ATO was the first national fraternity to come to Florida.