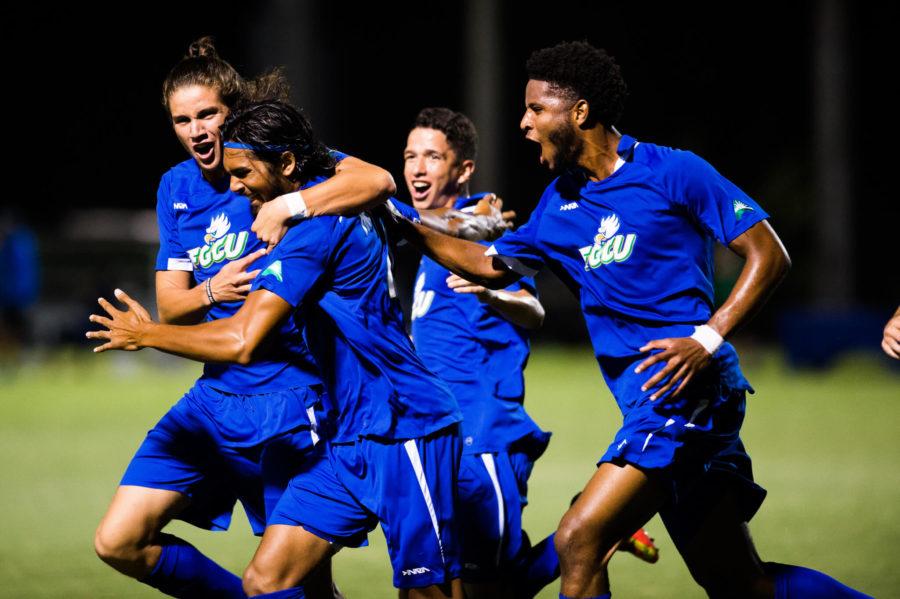 After having its weekend conference matchup against Jacksonville postponed due to Hurricane Matthew, the No. 12 FGCU Men’s soccer team extended its win streak to nine with a 3-2 victory USF.
“It was a good win on a tough night,” FGCU head coach Bob Butehorn said. “We knew in the second half that it was going to turn. We were going to get our chances, and we knew if we get one we are going to get a few.”
Scoring his third goal in two games, Shak Adams headed home the Eagles game winning goal, capping off a 3:47 period where FGCU scored all three of its goals.
In a back and forth affair in the opening 15 minutes of the match, the Bulls found their rhythm in the final third of the pitch, taking advantage of the Eagles inability to connect passes in the midfield.
After back-to-back corners, the Bulls found the opening goal in the 27th minute thanks to Lindo Mfeka’s third goal of the season.
With its eight game win-streak on the line, FGCU stepped up its pressure on offense in the final 20 minutes of the half.
The Eagles nearly grabbed the equalizing goal in the dying seconds of the half but Miguel Perez’s volley on goal was kept out by Spasoj Stefanoivc to kept USF up 1-0 at the half.
Butehorn’s bench prevailed for him once again, with two of his three goal-scorers, Roubos and Adams, coming off the bench and finding the back of the net.
“It feels good to be a part of the team,” Adams said. “All of this is really a team effort. The coaches have given me a chance to play, and I try to give it my all every time I play.”
Sixteen minutes into the second half, the Eagles aggressive offensive play paid off when Eli Roubos pulled them level, scoring his first goal of the season sparking the Eagles goal barrage.
Nico Samayoa found the back of the net 56 seconds after Roubos to put FGCU up 2-1 before Adams headed home the Eagles final goal of the game to give them a 3-1 lead with 20 minutes left to play.
Two minutes after FGCU pulled ahead two goals, Melvin Becket pulled a goal back for the Bulls, bringing them within one goal from breaking FGCU’s national leading win streak.
Despite heavy attacking pressure from USF, the Eagles held the Bulls scoreless in the last 19 minutes of the game to win their ninth straight game 3-2.
FGCU now turns its attention to Atlantic Sun Conference play on Saturday, when they face Stetson on Friday at 7 p.m. at the FGCU Soccer Complex.