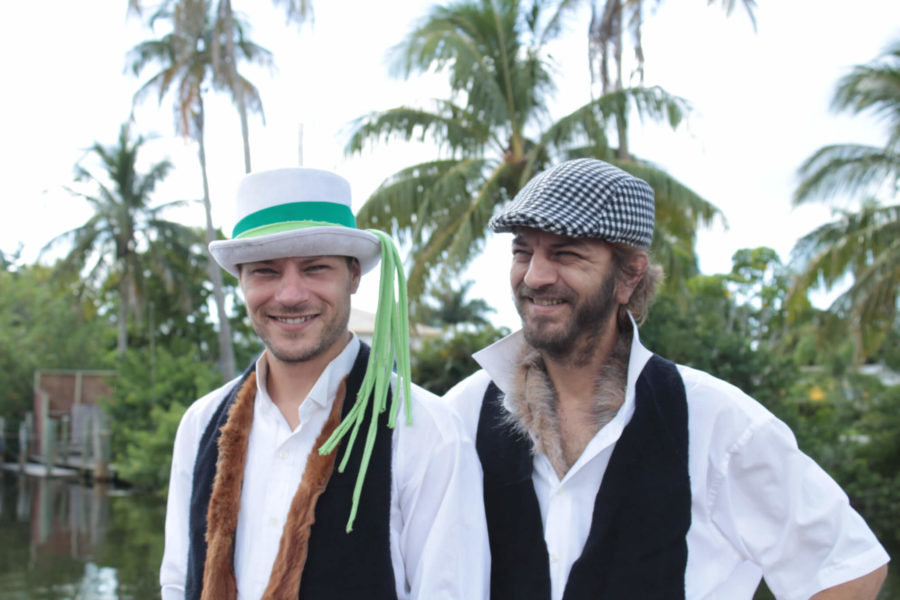 Warren Van Kirk and his brother, Greg Van Kirk, are dressed to impress.

Both brothers sport black dress pants and vests to match, but it’s the fur collars that hang around their necks that sets them apart from the patrons of the Olde Marina watering hole in Pine Island.

It’s hard to pull the Van Kirk brothers away for even a moment because patrons of the Olde Marina keep stopping them to chat, but right off the bat, it’s clear that these brothers are well known in the area.

They are not only the boys next door, but also the lead singer and bassist of the band Strange Arrangement which will be performing at the Sidney and Berne Davis Center later this month.

The band started out small, but quickly grew to make a name for themselves.

“We were backing other guys for a while. We would play at our house, and people would ask us to help them out,” Greg Van Kirk said, “And then we kind of started doing our own thing.”

“After a while, those same guys would be taking a break, and since they knew we did our own thing, they’d let us sing one song. And soon one become, two, three, four… and next thing you know we’re playing half the gig.”

Shortly after their start, the brothers went from playing music in their garage to playing at local watering holes and then bigger venues like the Sidney and Berne Davis Art Center, but the most interesting component of the band is its members.

For the most part, it’s the Van Kirk brothers, but they are often backed by singers and musicians in the community who they invite to jam out with them on stage. In a way, the brothers band acts as a platform for others to shine.

“They’re very strange, but very good and they bring the crowd,” Janick “Frenchie” Jeun-deux, a french native and Pine Island resident, said about the band and their music.

Strange Arrangement isn’t only interested in performing around SWFL, they’re also philanthropists who specialize in helping kids in the community through benefits like the Trash Bash and Mangrove Mania, as well as their own organization, Monday Music.

“Monday Music is – you almost never know what to expect – but basically it’s an environment that is well suited to help these kids grow their ideas in a non-restrictive and artistic way,” Warren Van Kirk said about the organization.

The brothers explain that they strive to teach music in unconventional but relatable ways that everyone can understand on their own level.

“We try to figure out how do you have to think about it? Are you a carpenter, then let’s relate it to wood. Are you a writer, then let’s relate it to writing. We have to get into your world to understand and relate music to that,” Warren Van Kirk said. “Because if you already know how stories and writing works, then if I relate that to music, you’ll go – ‘Oh, well music has an intro, a body, and a conclusion?’ And you’ll get it.”

“Music has building blocks and a lot of people learn to read the music off the paper, but they never really learn why the music is put on the paper. We want people to understand the building blocks so that they can create something,” Greg Van Kirk said.

For residents who aren’t familiar with the band, Strange Arrangement offers a unique sound that plays on jazz, blues, rock and old folk sounds. People have said that no one ever knows what to expect from them.

“Sometimes people won’t be into hip-hop, but we’ll swing it and play a jazz tune, but let a hip-hop artist do some spoken word at the same time and people kind of warm up to it,” Greg Van Kirk said.

“Most of the time, people don’t really know what they’re going to like. [But we say] just taste the way I make it, you may like it,” Warren Van Kirk added.

They go on to explain that a lot of people are content to have them come and play their acoustics in the backyard by the fire, but the brothers want to push themselves to the limit. They strive to bring more to the table and create an image for themselves that’s akin to artists who have made it big.

In striving to do so, they’ve been asked to play at the Bury Me Brewing event later this month where they’ll be donning outrageous costumes and performing some of their original songs for guest to enjoy.

Strange Arrangement will be performing at the Sidney and Berne Davis Art Center on Oct. 28 at 7:00 p.m. at the Bury Me Brewing event. Though the brothers will undoubtedly be sporting costumes of their own, guests are not required to wear them, but they are encouraged. Tickets are $10 and can be bought online.

The brothers encourage everyone to come out and enjoy the drinks provided by the brewery and enjoy good music.

“The main thing is making that connection, getting them to genuinely enjoy it, and trying to provide the atmosphere that’s available to be enjoyed,” Warren Van Kirk said. “There’s a lot of things that people worry about that may not be necessary and we want to take their minds off that.”