Organically Twisted serves up anything but a conventional menu 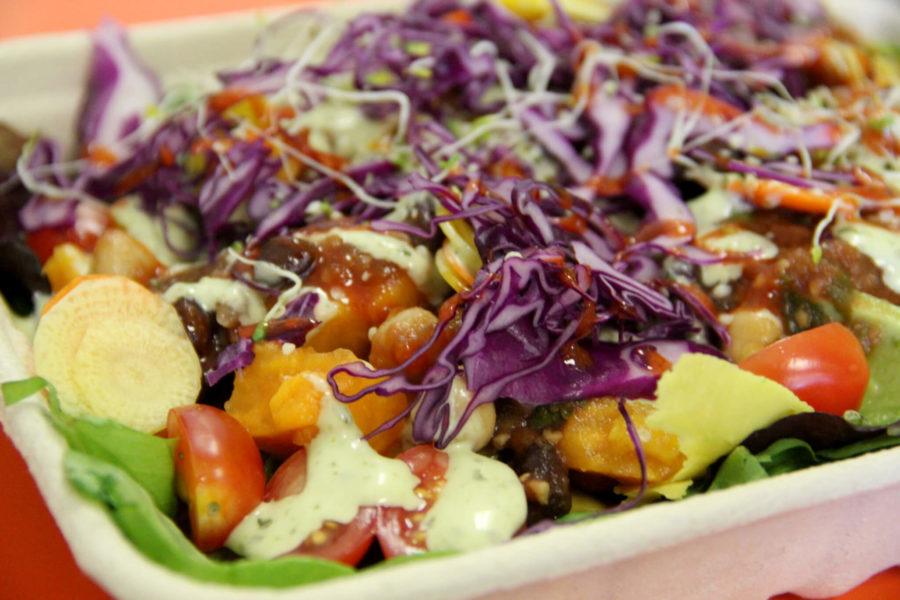 “Hello, my friend!” Chef John Hart calls over the blaring reggae coming from the open kitchen, as yet another regular walks into Organically Twisted. Six months ago, he would’ve called out the same, just from the confines of his food truck.

The truck’s still around, though it’s even harder to track down than the days when it was guaranteed to be parked at most Naples farmers markets with a line three times the length of the truck.

That’s how I initially found him — in the Vanderbilt Shoppes parking lot one Saturday morning a couple years ago.

Hart complimented my large, black hat. I felt guilty that I couldn’t bring myself to order one of the delicious-sounding menu items, given it was 9 a.m.

The next time, a few weeks later, I waited in a 20-minute line, shielding myself from the sweltering heat in the same hat.

Despite having served hundreds, if not thousands of people since we first met, Hart beamed at me when I reached the window and said, “There’s that hat I like!”

That time I tried the Avo-Loco (bowled) and Mama’s Pumpkin Bread, which became my regular order for the following year — not because there weren’t plenty of great options on the menu or amazing looking plates passing me each time on their way out the window but because it’s hard to want anything else on earth when the Avo-Loco exists.

The Avo-Loco is vegan, which I vaguely noticed the first time I ordered it but had signed up on the basis of half an avocado in it alone. Now, though, I’m quite aware it’s vegan and would go as far as to say I could go vegan based on this dish alone.

Essentially a glorified mixed green salad, the Avo-Loco earns the title of bowl based on the amount of stuff Hart loads onto each order.

On top of the greens, roasted sweet potato chunks, garbanzo-black bean salsa, tomatoes, cilantro sauce and that aforementioned avocado are piled. As I said, there’s no meat, but it is not at all missed in each crisp bite. It’s as fresh as good sushi but will actually fill you up.

I finally ventured from my usual when the brick-and-mortar location opened up in North Naples, though I admit I was most excited about the fridge of Sarasota-based 221 BC Kombucha near the register.

Kombucha — a fermented, slightly bubbly tea, which is rich in probiotics — is an acquired taste at first. Many are drawn in for its health benefits and stay for the slightly addictive quality that builds with each bottle.

Since first ordering from Hart, I have gone back to gluten-free living for health reasons, and thus, avoided Mama’s (moist, delicious) Pumpkin Bread since, but the restaurant offers at least one gluten-free dessert option — typically, a shifting cupcake flavor and occasionally the Special Brownie. I’m biased I must admit. I would eat dessert every meal if it were socially acceptable (or if my mom let me).

So, yes, I’ve come in to OT even when I’m not hungry to pick up dessert as a “snack.” The most notable has been the jalapeño corn cake with black bean buttercream frosting — odd, unexpected, sweet and savory. I was floored.

But, a couple weeks ago, the lime-rita cupcake became a close second. Somehow, in a gluten-free cupcake — which elsewhere would typically suffer from being grainy, dry and tasteless — Hart managed to capture the tartness of a margarita with the subtle sweetness of a key lime. I went back and ordered another a few hours later.

If dessert’s not your thing, don’t fret. The regular menu changes by week and, sometimes, by day. The Avo-Loco is, thankfully, offered always. But, gems like the avocado and artichoke or beet and goat cheese grilled sandwiches or the veggie burgers — made with a pan-fried black bean and mashed plantain patty — spring up here and there (and yes, with gluten-free bread if you ask nicely).

Likely due to the public uproar about the truck-favorite blue crab salad not being offered in-store, the item is now available when the seafood supply allows.

Hart keeps up with trends though, adding items like zoodles — noodles made from spiralized zucchini — to the main menu as they become relevant. His zoodles, in particular, when available, are a must have. Honestly, forget everything I’ve told you up to this point and order the zoodles whenever possible, and cry if not possible.

These zoodles, typically served with a nut cheese, are, once again, vegan but are essentially the fettuccine alfredo of the menu. You’ve already made up your mind, but you look over every other item anyway; they all sound great but still pale in comparison to that creamy, comfort dish.

For those on campus, the good news is the OT truck will be rejoining the cast at Fort Myers Brewing Company’s Thursday night food truck rallies soon enough, but until then, you can stop in the shop from 11 a.m. to 6 p.m. Monday through Thursday.