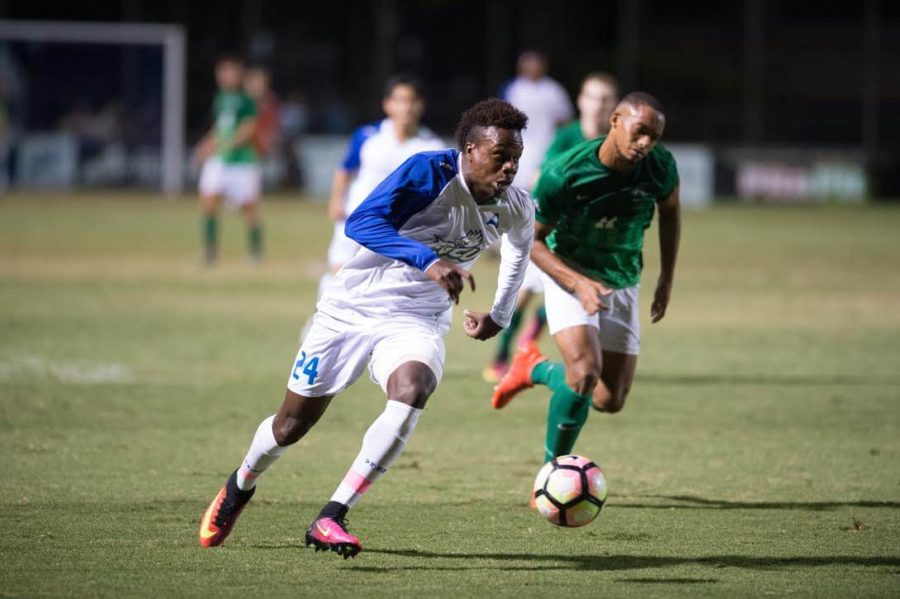 Reported by Matt Rothman and Miguel Rodriguez.
After losing its 10-game win streak in a 3-2 defeat against UNF on Tuesday, the No.11 FGCU men’s soccer team defeated USC Upstate 3-0 on Saturday, Oct. 22, in its final home game of the regular-season.
“My whole message was we have wins and losses and setbacks in your life but it’s all about how you respond to things,” FGCU head coach Bob Butehorn said to FGCU Athletics. “I was very happy. We stuck a new goalkeeper in there and a new center back in there, so it looked like we were maybe a little lethargic at first but really we just wanted to gain possession early. It’s also good to get a win on senior night. We continue to bring in quality human beings and these three are among them. You always get a little emotional this time of year but I’m happy we won tonight for them.”
Prior to the game, the Eagles recognized three seniors as Jack Blatchford III, Santiago Ortiz, and Justin Gavin were all honored on the field accompanied by coaches and family.
The Spartans came out strong with some early pressure, which resulted in two quick corners, but FGCU was able to sustain the pressure and generate a rhythm of its own.
At the 18:08 mark of the first half, the nations highest-scoring offense struck first as Albert Ruiz took a through ball from Arion Sobers-Assue to covert his 15th goal of the season to give FGCU a 1-0 advantage.
The Eagles continued to add pressure and, eventually, their lead as Sobers-Assue had an effort on goal that was turned away by Davis, but Ruiz was there to pick up the rebound for his second goal of the night and his nation-leading 16th goal of the season.
With his 16th goal, Ruiz is now tied for the most goals in a season by an Atlantic Sun Conference player since 2006.
Despite an effort on goal in the dying moments of the half, the Eagles went into the half with a 2-0 lead through 45 minutes.
Eight minutes into the second half, the Eagles were not finished scoring in the first half as Sobers-Assue was able to strike for his 12th goal of the season on a shot toward the far post to increase FGCU’s lead to three.
With a 3-0 lead the Eagles continued to maintain possession, keeping the Spartans from generating any offense.
In the last minutes of the match, it appeared Rielee Mohsin increased FGCU’s lead to four, but his goal was waived offside, giving the Eagles a 3-0 defeat.
The Eagles return to the pitch on Tuesday, Oct. 25, when they travel to Jacksonville to take on the Dolphins before they finish off ASUN play Saturday, Oct. 29 when FGCU takes on Lipscomb.
Highlights from the game:

Filmed and edited by Brooklyn Davis.
Music: BWU by San Holo via SoundCloud through Creative Commons