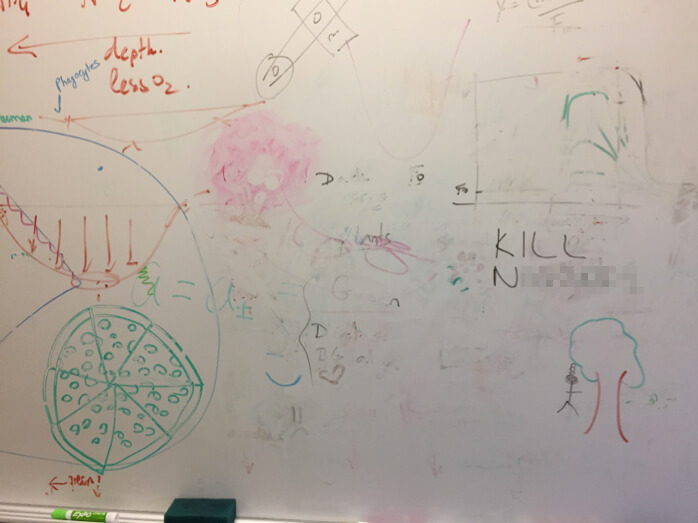 UPDATE: (Oct. 28 4:06 p.m.) UPD Lt. Jim Slapp sent a statement on behalf of Chief Steven Moore who is currently on vacation.
Slapp said in the statement UPD relies on a software system called University Crystal Reports that generates incident reports by signal codes. The report UPD sends to Eagle News and other media does not include various signal codes including, “Signal 62 – Request Officer,” and “Signal 14 – Information Call,” according to Slapp.
“On Oct. 12 when the faculty member contacted UPD about the whiteboard drawing and words, the call was logged by UPD dispatch as a ‘Signal 62 – Request Officer,’ and thus it was not later included in the computer-generated Crystal Reports weekly press report,” Slapp said in his statement. “UPD did not intentionally exclude this report and information from Eagle News, and when a public records request for it was made of the university, the report and picture were provided that same day to the requester.”

A review of the UPD summary report from Oct. 11-18 shows that the racial slur found in Seidler Hall was left out of the list of incidents reported on campus.
Every week, UPD sends Eagle News a summary of all reported incidents on campus, so the newspaper can curate Police Beat in the news section.
FGCU professor Sharon Isern, who later reported the incident to UPD, found a drawing of a stick person hanging from a tree, accompanied by the phrase “KILL (N-word).“
The incident was reported on Oct. 12, nearly two weeks before the FGCU student body was made aware of the situation.
A student-led protest following the discovery of the incident took place on Oct. 27. The rally began in the student plaza bus loop and then marched to Marieb Hall to confront the Board of Trustees members during their meeting.
Check back with Eagle News for more on this developing story.