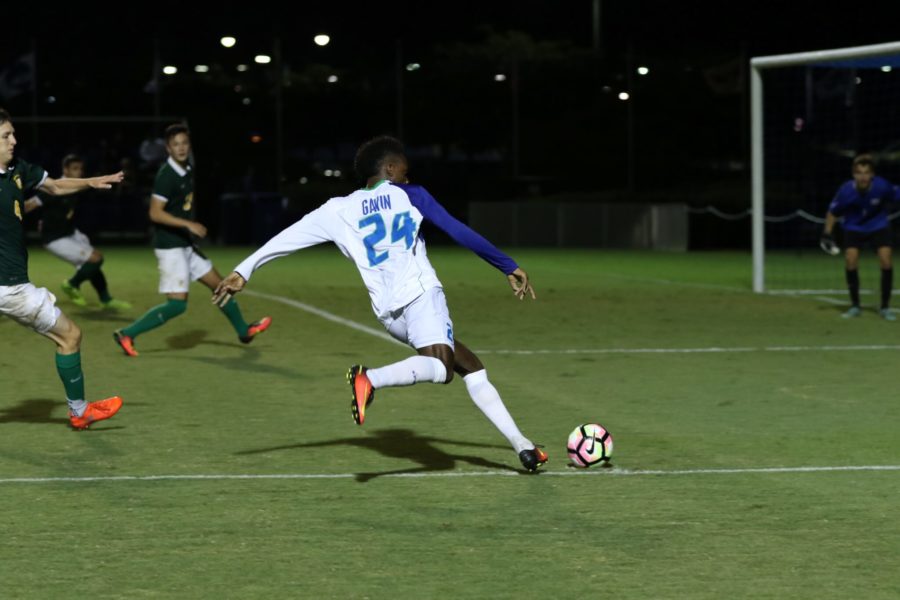 Reported by Matt Rothman and Miguel Rodriguez.
In its final matchup of the regular-season, the No.20 FGCU men’s soccer team played to a 1-1 draw against Lipscomb Saturday night, earning the No.2 seed in the Atlantic Sun Conference tournament.
“It wasn’t the result we were looking for, but I’m glad we were at least able to get a point and be able to host an ASUN semifinal game next week in front of our home fans,” FGCU head coach Bob Butehorn said to FGCU Athletics. “I’m really proud of the way they battled to at least get a point. Once we knew the UNF score (which started one hour before FGCU kicked off), we knew we just needed to get a result. Being able to get home and get some rest before playing in front of our home fans is vital, and we’re looking forward to it.”
The Bisons’ offense got off to a strong start, testing FGCU goalkeeper, Jared Brown, early, but none of their efforts were able to give them an early lead.
After a back-and-forth first half, the Eagles found the first goal of the night in the 40th minute, when Miguel Perez’s corner kick found the head of Kamar Marriott to give FGCU a 1-0 lead going into the half.
Coming into the second half down one, Lipscomb turned up the pressure in the final-third of the pitch, finding the back of the net in the 52nd minute, thanks to a 30-yard strike inside the right post by Joe Kerridge.
Limited to no shots in the second half compared to the Bisons’ eight, the Eagles headed into extra time tied at one a piece.
Trading shots at goal in the first period of overtime, Lipscomb nearly found the game-winning goal from Ivan Alvarado’s free kick, but Brown was up to the challenge, keeping the game level.
Despite multiple looks at goal in the first half of added time, neither team was able to find the game winner in the second half of overtime, ending in the teams’ first tie against each other in their respective programs’ histories.
Next, the Eagles will host the ASUN tournament semifinals Saturday, Nov. 5 against the winner of the Lipscomb and Stetson quarterfinal matchup on Thursday, Nov. 3.