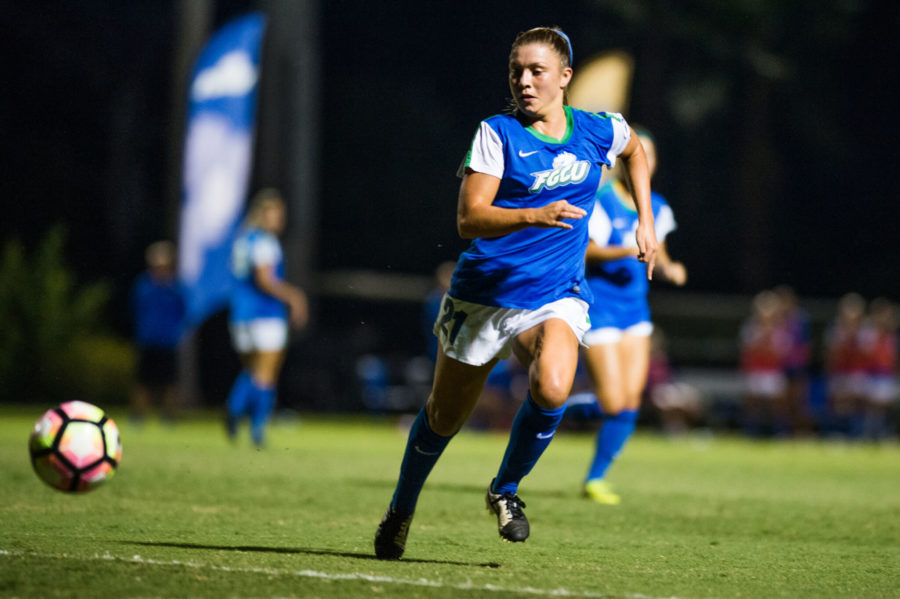 Earning a first round bye after claiming its seventh-consecutive Atlantic Sun Conference regular-season title and the No.1 seed in the ASUN Women’s Soccer Championship, the FGCU women’s soccer team defeated Kennesaw State 2-1 to earn a spot in the ASUN Women’s Soccer Championship final.
“Credit to Kennesaw, they are very good,” FGCU Head coach, Jim Blankenship, said. “At this point of the season, it’s very difficult to get results. We scored a phenomenal goal. We talked at half time to try and get the second one and bring the pressure, and I thought our guys did a great job at that.”
Behind a first half goal by Emilie Olsen and a second half goal by Tabby Tindell, the Eagles will face Lipscomb in the ASUN Women’s Soccer Championship final on Sunday at 1 p.m. at the FGCU Soccer Complex.
In a back and forth first 20 minutes of the first half, Emilie Olsen proved to be a huge problem for the Kennesaw State backline.
Opening the scoring with a one-time outside of the right foot finish from 12 yards out from a through ball played in by Paulina Speckmaier to give the Eagles a 1-0 lead, Olsen continued to pressure the Owls backline, firing three shots in the first half, including an effort that struck the crossbar from 23 yards out.
Despite holding the bulk of possession after the goal from Olsen, the Owls threatened the Eagles in the attacking third, pressuring FGCU Goalkeeper Melissa Weck with multiple shots at goal, but Weck was up to the task, marking four saves to keep FGCU ahead 1-0 at the end of the first half.
Playing her first game since Oct. 17, due to a knee injury, the three-time ASUN Player of the Year, Tabby Tindell, scored what would eventually be the game-winning goal a minute into the second half.
“The first round bye helped me rest up and let my knee heal a little bit,” Tindell said. “Honestly, my biggest concern tonight was being in shape enough to last the whole game and I’m glad I was able to last the whole game.”
Coming from Meaghan Mulligan’s corner, Ali Rodgers headed the cross towards Tindell where she collected the ball and slotted it in the back of the net to score her 14th goal of the year and give FGCU a 2-0 advantage.
With their season on the line, the Owls turned up the pressure on offense, despite the Eagles firing multiple shots on goal on the other side of the pitch.
With six minutes remaining in regulation, Emely Sosa cut FGCU’s lead to one, heading the ball past Weck from Monica Herrera’s corner.
Outshooting the Eagles 11-7 in the second half, the Owls desperately searched for the equalizer that would force added time, but FGCU held on to book a spot in the final, defeating Kennesaw State 2-1.
With the ASUN Women’s Soccer Championship and a spot in the NCAA tournament on the line, No. 1 seed FGCU will play No. 2 seed Lipscomb, who they faced earlier in the season on Oct. 9. Holding a 2-0 going into the final 15 minutes of regulation, the Bisons pulled back two goals to force added time, but the teams played to a 2-2 draw.
Down 1-0 in their semi-final matchup against Stetson prior to FGCU’s contest, the Bisons scored a goal in the final four minutes of regulation and in the dying minutes of the second overtime period to defeat the Hatters 2-1.
“It’s going to be tough match,” Blankenship said. “All year they (Lipscomb) have had games like tonight where they are down 1-0 and they scored a goal with four minutes left. We are going to have to play a lot better defensively than we did tonight if we want to get a result.”