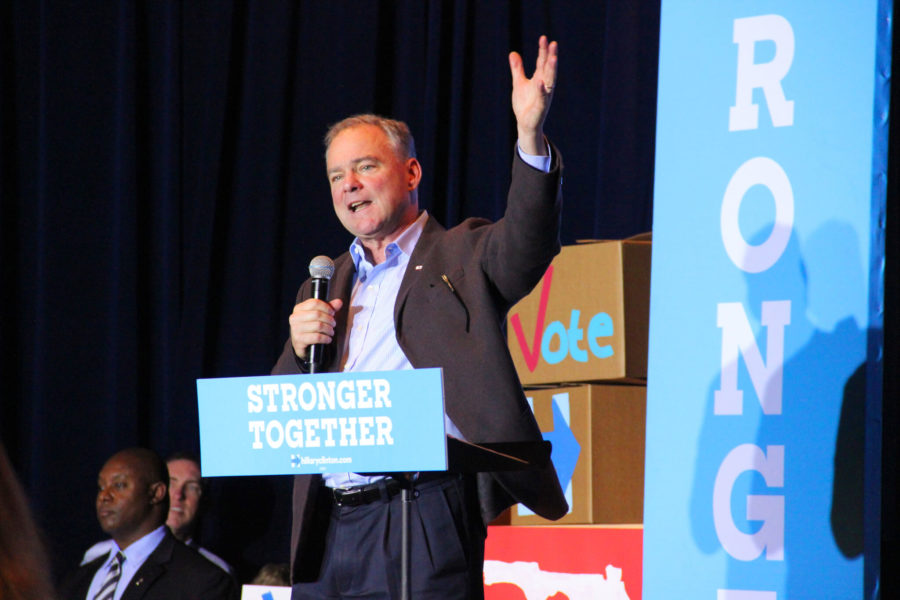 “You guys are a checkmate state,” Sen. Tim Kaine (D-Va.) told the crowd of several hundred at the Lee Campus of Florida SouthWestern State College Saturday afternoon.
The vice presidential candidate’s visit to Fort Myers came at the tail end of his nine-day-long Florida tour for Sec. Hillary Clinton’s campaign and follows former president Bill Clinton’s stop in adjacent Immokalee the week prior. Clinton spent her Saturday campaigning across the state in Pembroke Pines.
“By ‘checkmate,’ I mean, if we win, it’s over,” Kaine said. “If we win Florida, Hillary will be president.”
Those in attendance at the rally included Cape Coral councilwoman Jessica Cosden, Fort Myers councilman Johnny Streets Jr. and U.S. congressional candidate April Freeman, each of which spoke before the senator took the stage.
“Make no mistake, this is the most important election of your lifetime,” Streets said. “This is about your future, your children’s future. This isn’t just about Obamacare. It’s about your momma’s care, your brother’s care, your sister’s care, your care.”
Freeman approached the podium to an already lively crowd following Streets’ speech. But, the crowd erupted in more cheering yet, as GOP candidate Donald Trump’s campaign was directly mentioned for the first time during the rally.
“Hillary understands the struggles women have faced for centuries — struggles like equal pay for equal work, paid family leave, our fight against domestic abuse, misogyny, sexual harassment in the workplace and blatant sexual assault,” Freeman said. “That other guy, he doesn’t care about women because he is the abuser and the assailant.”
To follow, much like his running mate, Kaine spent a great deal of his hour-long speech discussing the importance of education.
“Education is the great lifter and the great leveler,” said Kaine, whose wife was the Secretary of Education in Virginia up until Kaine was added to Clinton’s ticket.
Kaine, who said at one point Clinton “doesn’t like to brag about herself,” took the opportunity to put in a good word on her behalf about her decades-long work in the education sphere.
“I’m excited to see what a presidency would be like if somebody brings a lifelong passion on the success of families and kids into the Oval Office,” Kaine said.
Kaine went on to compare the opposing campaigns for the latter half of his time, calling out the differences in their economic and immigration policies and, once again, criticizing Trump for not releasing his taxes.
“We got all sorts of challenges, but we can always solve our challenges as long as we let everybody around the table to solve them,” Kaine said.
In the neck-and-neck race for Florida’s 29 electoral votes, Trump also made his presence known in Tampa Saturday and, much like the Clinton campaign, had events in battleground states North Carolina and Colorado, amongst others.
According to RealClear Politics, Clinton currently leads Trump in Florida by a one percent margin.
Considering the similarly tight Al Gore-Bush race was decided by 537 votes in Florida, the 2,000 people registered to vote by the Lee County branch of Clinton’s campaign may have great significance come Election Day.
Polls open at 7 a.m. Tuesday and will remain open until 7 p.m.