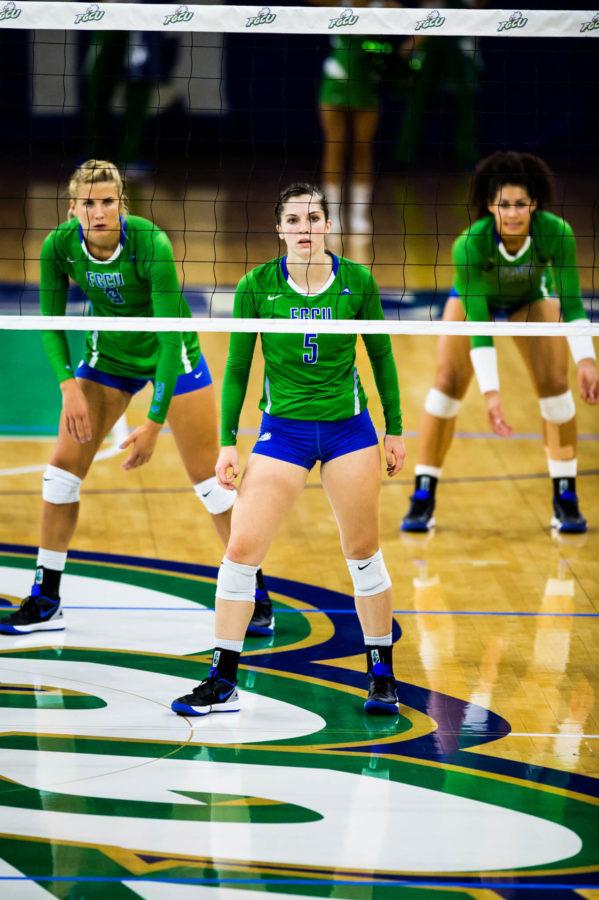 On Friday evening, FGCU took a tough loss against Lipscomb in three sets at Alico Arena (21-25, 12-25, 29-31). This was one of the Eagles’ last home games, and this loss now puts their record at 22 wins and five losses for the season.
In this match, Lipscomb came out on top offensively and defensively, recording 51 kills and 64 digs, with a hitting percentage of .328% compared to FGCU’s 35 kills, 51 digs, and .173 hitting percentage. However, Amanda Carroll contributed to FGCU’s score with 16 kills and 15 digs. Leigh Pudwill contributed 8 kills.


To begin the first set of the match, Lipscomb immediately took a short lead with two consecutive kills from Lipscomb’s Carlyle Nusbaum. FGCU answered with two back-to-back kills from Carroll and Pudwill to tie it up.
For the majority of the game, FGCU and Lipscomb fought back and forth for each point. The two teams were tied 15 times throughout the game, until Lipscomb had another kill at 19-18 and kept the lead the rest of the set. FGCU worked for a comeback off of a kill from Giovanni Borgiotti with an assist from Maggie Rick to have FGCU one point shy of being tied with Lipscomb, but a kill from the Bisons and an FGCU error cut the comeback short. A kill from the Bisons ended the first set in their favor, 25-21.
The second set began much like the first, with a kill from the Lipscomb and an attack error from FGCU. The Bisons immediately took the lead and FGCU struggled to catch up. After the Bisons took a five-point lead at 9-4, FGCU took a timeout. Following the timeout, FGCU worked to catch up, but continued to make some offensive errors. In this set, FGCU experienced more errors than Lipscomb did, and that allowed the Bisons to have a more effective offense.
The Eagles made a short comeback with a kill from Borgiotti at 21-10, Lipscomb. Another kill from the Bisons followed, and set two ended with two consecutive errors from the Eagles.
The Bisons were one point shy of set win when Carroll and Borgiotti executed back-to-back kills, but a kill from Lipscomb ended set two with the Bisons at an advantage of 2-0 in the match, 25-12.
The third set began with intensity from the Eagles and a big kill from Daniele Serrano. FGCU took the lead in this set with a kill from Carroll, Kaitlan Krivdo and Leigh Pudwill to give FGCU the lead of 6-3. After several errors, Lipscomb caught back up and took the lead again, 15-10.
A kill from Krivdo and two kills from Pudwill worked to close the score gap. A kill from Pudwill and three kills from Carroll tied up FGCU in the later end of the third set, 23-23. The two teams went back and forth, battling for the third set.
FGCU took the lead with a kill from Carroll at 29-28, only one shy of claiming the third set, but an FGCU service error, a Lipscomb kill and an FGCU attack error allowed the Bisons to come back and sweep the match in three sets, 31-29.
The Eagles are now 22-5 and will face off against Kennesaw State and celebrate the FGCU seniors on Senior Night.
Delete Image
Align Left
Align Center
Align Right
Align Left
Align Center
Delete Heading