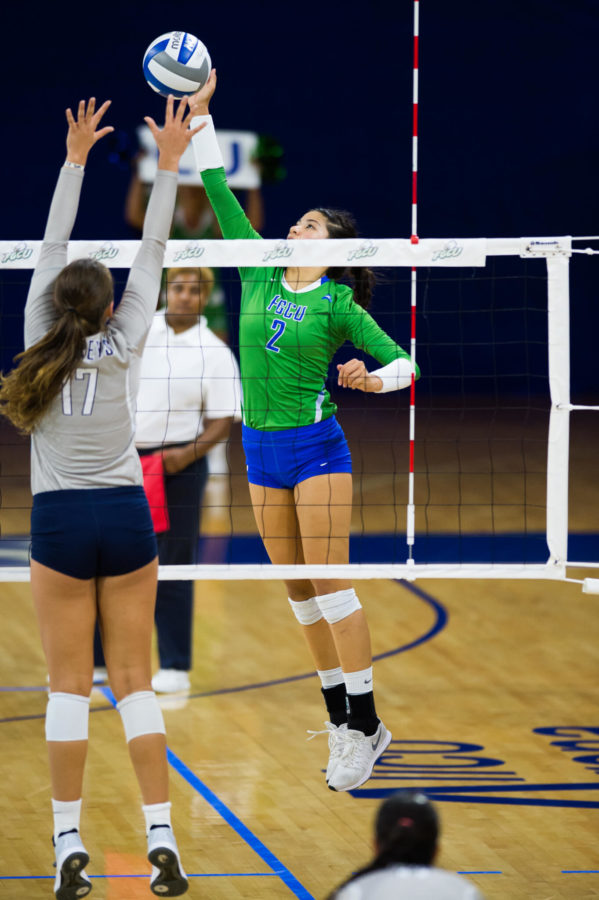 On Saturday evening, FGCU faced off against Kennesaw State for the second time this season. When FGCU faced KSU back in October, FGCU lost in four sets, but in the most recent match against KSU, FGCU claimed the win at Alico Arena.
The Eagles and KSU went set for set, but FGCU dominated in the fifth set for the match win on Senior Night. FGCU had 61 kills and 68 digs, compared to KSU’s 60 kills and 53 digs. FGCU also had eight blocks compared to KSU’s four blocks. Amanda Carroll contributed 21 kills during the match, and Karissa Rhoades had 25 digs.
In the first set, FGCU opened up with intensity that helped them take the immediate lead. A kill from Amanda Carroll, followed by a big block from Daniele Serrano and Leigh Pudwill, contributed to their 8-4 lead early on in the set. Maggie Rick assisted with several sets to the right side and outside hitters during this set which made the offense very versatile.
A big kill from Giovanni Borgiotti took the set to 18-14 and forced KSU to take a timeout. KSU started to make a comeback and closed in on FGCU’s lead to tie it up at 21-21. A service ace from Carroll capped off the first set in FGCU’s favor, 25-22.
The second set started off much like the first, with an opening kill from Carroll, but KSU started to take the lead and forced the Eagles to take an early timeout at 3-6. A kill from Borgiotti broke KSU’s scoring run after returning from the timeout. KSU collected several kills on FGCU and continued to hold onto the lead, but a service ace from Karissa Rhoades, a block kill from Marlene Moeller, and a kill from Borgiotti tied the set back up at 13-13. KSU took the lead again at 21-19 and the Eagles took their final timeout. The Eagles fell short in the second set and KSU tied up the match, 1-1 (25-23).
Another kill from Carroll and a seven-point run gave FGCU a lead in the third set, 7-0. Another big block from Pudwill and Serrano contributed to the intensity in this third set to take the lead to 10-1. Throughout this whole match, Serrano and Pudwill have helped FGCU defense by being strong blockers at the net. A powerful cross-court kill from Carroll ended the third set in favor of FGCU, 25-14. FGCU now enters into the fourth set with match advantage 2-1.
The fourth set was evenly matched and FGCU effectively took a three-point lead early on in the set at 9-6. KSU came back and tied up the set at 14-14, forcing FGCU to take a timeout. Following the timeout, KSU took the lead and held onto it until the end. A kill from Carroll was part of FGCU’s comeback, but a service error from the Eagles ended the set in favor of KSU, 25-21.
The fifth started with much excitement as FGCU worked to claim this win on the seniors’ last home game. In the fifth set, FGCU took the lead from the start with kills from Pudwill, Serrano, Moeller and Carroll, to give FGCU a five-point lead, 10-5. KSU started to close the score gap, but a kill from Carroll gave the momentum back to FGCU. Lastly, a service ace from Maggie Rick and another kill from Carroll ended the match with a win for FGCU, 15-9.
The Eagles now have a record of 23-5 and have tied the D1 program record with 23 wins in 2016.