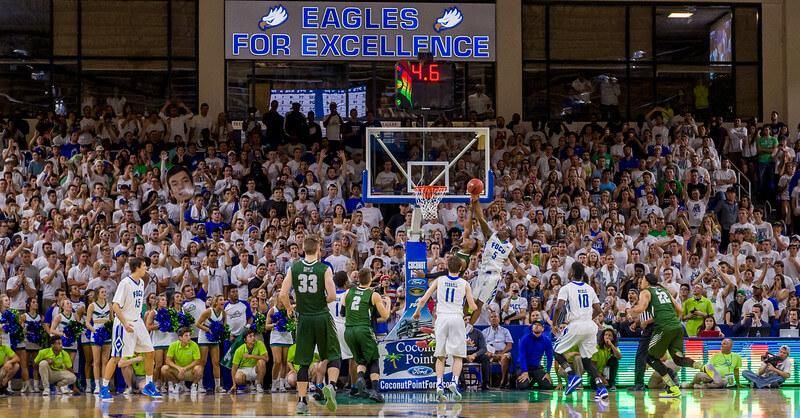 Coming off a 21-14 season, the reigning ASUN Conference champion, the FGCU men’s basketball team, looks to build off of last year’s NCAA tournament appearance.
After another Big Dance experience, the Eagles have some new faces integrated into their roster along with a lot of familiar faces.
While only losing two seniors, they have managed to bring in two freshman stars, RaySean Scott Jr. and Christian Carlyle.
RaySean Scott Jr. played high school ball in Compton, California, where he became a three-star recruit. At 6’ 7”, Scott shows off his superior rebounding skills and fits into Dunk City nicely. He averaged 18 points and 12 rebounds in his senior season.
Christian Carlyle played his high school ball at Bishop Kenny High School, where he averaged 23 points along with five rebounds and three assists. He was named a four-star recruit and the 20th best prospect in the state of Florida.
Guards, Zach Johnson and Christian Terrell, and forward, Marc-Eddy Norelia, are all veterans of the team.
As Norelia and Johnson earned themselves spots on the preseason All-Conference team, they’ll look to continue last season’s play. Norelia led FGCU, averaging 17 points and nine rebounds, and Johnson led the Eagles with an average of three assists per game, while averaging 11 points and three rebounds per game.
Knocking down a team high 47 three-pointers while shooting last year shooting around 36 percent from beyond the arc, Terrell averaged 13 points, 5 rebounds, and 2 assists last year.
Another player making preseason headlines for FGCU is Demetris Morant, who earned the ASUN’s preseason Defensive Player of the Year title.
The Eagles open their season on Nov. 11 in Jacksonville, Florida, as they take on the Florida Gators.
The Eagles have a tough schedule to start the season, as they face the SEC, Big 10, and Big 12 opponents in three of their first four games.
Starting the season on the road, the Eagles will face UT Arlington in their home opener on Nov. 16 at 7 p.m.