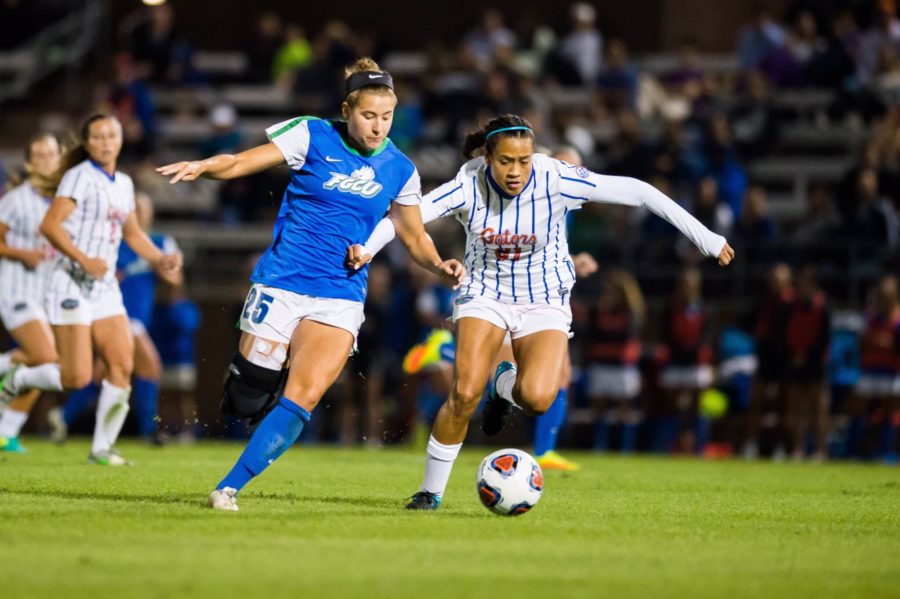 Coming into the game unbeaten in 12 straight matches, the ASUN Champion FGCU women’s soccer team fell to No.9 UF 3-0 in the first round of the NCAA tournament.
“It’s not the result we were hoping for,” FGCU head coach Jim Blankenship said. “Credit to them. I mean, they’re really good, and they’re very good with the ball, we probably would have had to play a false game. So it wasn’t the result we were looking for, but really proud of our kids and how they battled through to get to this point.”
Despite being outshot 22-2 through the match, the FGCU backline held strong during the first 70 minutes of the game, with the help of strong play by Melissa Weck in between the sticks, recording nine saves in the 3-0 defeat.
The nation’s leading goal scorer, Savannah Jordan, and the Gators came out strong, maintaining the bulk of possession while threatening the Eagles’ goal on multiple occasions.
Despite Meaghan Mulligan firing the first of the Eagles’ two shots toward goal in the 17th minute, FGCU failed to find any sort of rhythm through the first half, but thanks to strong play in the defensive third of the pitch, they were able to enter the half scoreless at zero.
The second half proved to be much of the same, as the Gators continued to punish the Eagles for their inability to hold possession, pressuring the Eagles’ goal with multiple efforts, but Weck was able to keep the game level with three saves in the opening 17 minutes of the second half.
After 12 shots and multiple attacking efforts, the Gators found their breakthrough in the 65th minute, thanks to a goal by Meggie Dougherty Howard, assisted by Samantha Chung, to put UF up 1-0.
Twelve minutes later, UF got a much needed insurance goal after the Eagles began to build a slight momentum in the Gators’ half when Julia Lester slotted the ball to the left of Weck to increase their lead to 2-0.
Facing a tired, defeated Eagles side with ten minutes remaining, the Gators were able to find the net one final time with Jordan’s 16th goal of the season, giving the Gators a 3-0 victory.
“I think they did a really good job defensively,” Jordan said. “They gave their 100 percent effort in blocking shots and kind of denying us the first half. I think we stayed patient with that but I do think they did a really good job of holding us defensively but once we got the first goal, Meggie did a good job of opening that up for us. It was a little better to relax after that.”
Losing six seniors and one of the most decorated players in three time ASUN Player of the Year and program all-time leading goal scorer, Tabby Tindell, the Eagles will hope to capture their eighth consecutive regular-season title and make the NCAA tournament for a fifth-consecutive season.
“I just feel super blessed,” Tindell said, reflecting on her four-year career at FGCU. “To go through all four years with an amazing coaching staff and amazing teammates just nothing but blessed and proud of what we accomplished and I’m looking forward to see what they do next year and the years after that.”