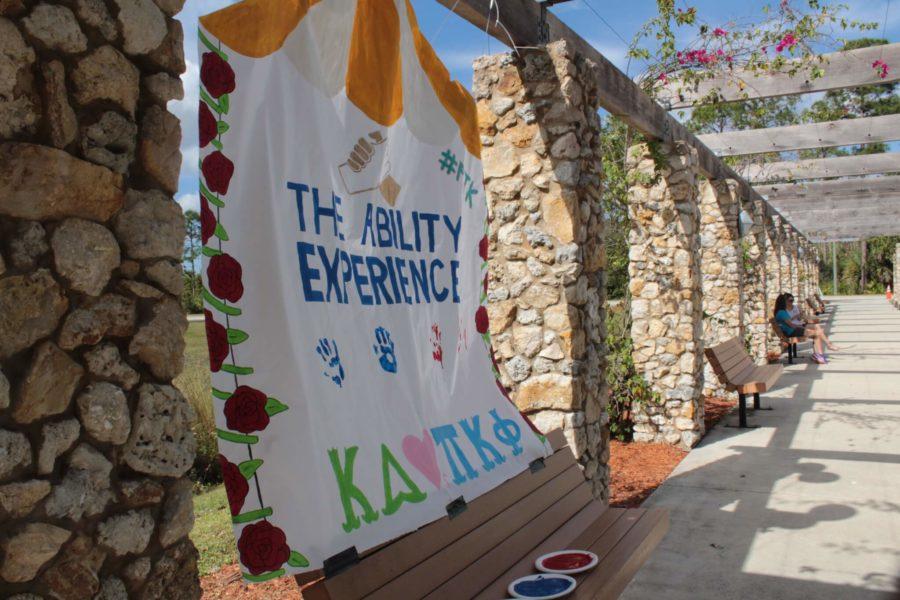 Phi Kappa Pi hung banners like this one which the students would vote on at the end of the festival. (EN Photo / Georgette French)

This year has been filled with strife for a lot people in the community, but Pi Kappa Phi is shooting to help make a change.
The FGCU fraternity, whose mission is to create lifelong brotherhood while encouraging community service, strives to keep up with its own philanthropy The Ability Experience, but this past week, they also lent a huge helping hand to the community.


“A lot of what makes the front page isn’t always the most positive story, but we [as a campus] definitely need to encourage discussing and sharing the positive things that we’re all doing,” Joseph Rotella said.  “And as a fraternity, we have been trying to enhance the image of the university and its communities in the same regard.”
The brothers worked to do this through several philanthropic events they participated in, including Surfers for Autism which took place on Nov. 5. Instead of spending the day enjoying sun and surf for themselves, the brothers taught autistic children how to surf at Fort Myers Beach.
Surfers for Autism is a worldwide program that starts in Australia and tours all over the world and, according to Robert Peia, it has seen more than 200 participants per location with its last stop for this tour being Fort Myers Beach.
According to Hunter Parson, that’s where more than 100 volunteers, including members of Pi Kappa Phi, registered to help the children. For thirty minutes a session, each child was able to learn to stand on a surfboard, paddle and have fun in the water.

The next day, the brothers rose to the challenge of raising $2000 for their philanthropy, The Ability Experience, which also focuses on individuals living with disabilities. on Nov. 9, they hosted an all-inclusive festival for about 50 children from the De LaSalle Academy.
The event was intended for both the kids and those at FGCU to enjoy themselves and have fun in a bounce house, on a slide, or just beating the brothers in games of football and soccer. There was also music, free food and a dunk tank where guests could test their skill and be rewarded by sending a Pi Kappa Phi member for a swim.
Parson was among many who joined in on the fun by engaging in a game of football with the kids and making sure that they were having fun. For him, getting out and being engaged was more important and impactful.
“I won’t remember sitting down and tabling, what I will remember is these kids out here having fun and smiling ear to ear,” Parson said.
“We weren’t asking for donations or anything like that, but it was an event to show these kids who don’t have these opportunities every day some fun,” Peia said.
For the men of Pi Kappa Phi, hosting events like these helps bring positivity back to the community, and the brothers believe that by spreading philanthropic work, they can inspire the community to do good for others as well.

“As a fraternity, we are always focused on the future and how we can better our impact on the campus in the future,” Rotella said.
The brothers agreed that if FGCU students and the community could focus on the positives, it would help bring everyone together and they urge students to participate in getting out and lending a hand, and the best thing that they can do to help is be aware.
“Be more aware of what everyone is doing to make a difference. We are not out here for ourselves. We are here to inspire others as well,” Zachary Tasse said.
Delete Image
Align Left
Align Center
Align Right
Align Left
Align Center
Delete Heading