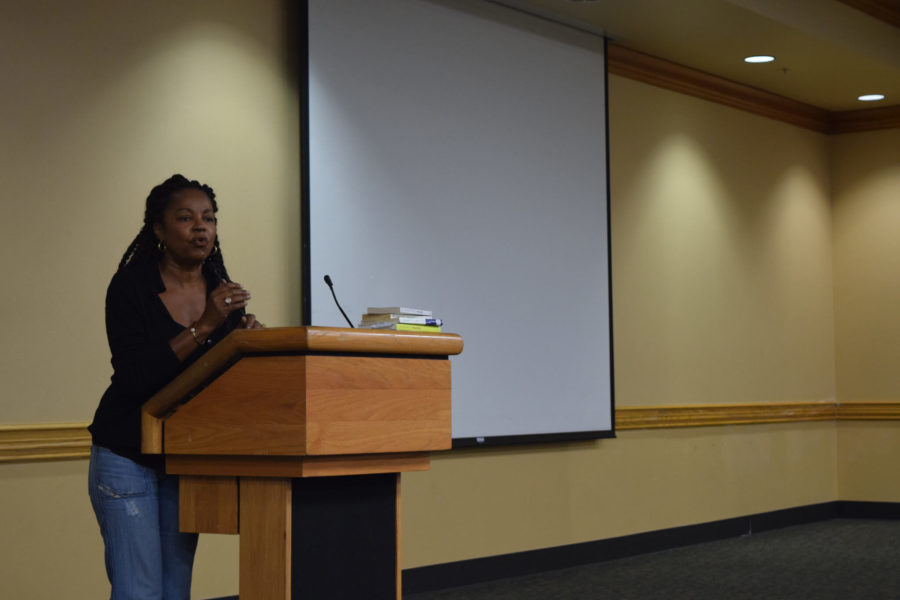 Pineau was scheduled to begin speaking to attendees starting at 11:30 a.m.; however, since she experienced flight delays, she didn’t arrive on campus until around 12:30 p.m.

The event, which was put on by the Department of Language and Literature and the French Embassy, was held in honor of National French Week, a weeklong celebration held annually by the American Association of Teachers of French.

Delphine Gras, an associate professor and foreign languages coordinator at FGCU, spoke before Pineau. Gras shared a PowerPoint with the crowd, detailing information on Pineau and her life.

“I have a little presentation to introduce her to you before she gets here,” Gras said.

Pineau was born in Paris in 1956 to Guadeloupean parents. After studying literature at the University of Paris at Nanterre, Pineau found herself working as a psychiatric nurse.

Her first novel, “La Grande dérive des esprits” (The Drifting of Spirits) helped her become the first woman to win the Carbet de la Caraïbe Prize, an annual award given to the best literary work in French or French Creole from the Caribbean and the Americas.

Once arriving to the ballroom, Pineau dove right into answering questions from the crowd. She had a translator reiterating her answers in English, as she addressed the crowd only in French.

“I have a lot of gratitude toward life,” Pineau said. “I’ve been through hard moments, but it has built me.”

Pineau’s work addresses several themes, including  the lives of Caribbean women, racism and its effects on women, as well as feelings of exile.

When asked which book she’s written is her favorite, Pineau said that is like asking a mother who her favorite child is.

“Each book represents a moment in my life,” Pineau said. “The characters, they accompany me for a certain amount of time, so I love them all.”