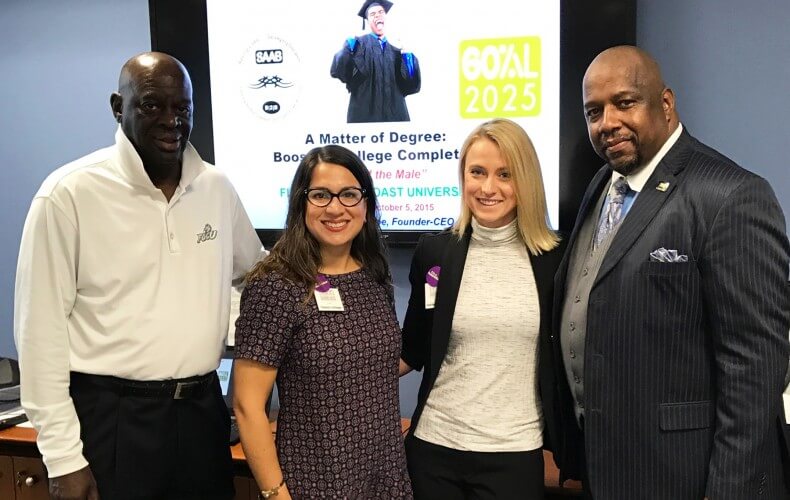 African-American and Latino male students at FGCU will soon have more opportunities to grow academically, socially and professionally in the university community.

The FutureMakers Coalition, a local organization dedicated to increasing the percentage of Southwest Florida residents with college degrees as well as post-secondary certifications, is partnering with FGCU to bring a Student African American Brotherhood chapter to the university.

SAAB, a national organization founded in 1990 by Dr. Tyrone Bledsoe, the former Vice President for Student Life and Special Assistant to the President at The University of Toledo, works with African-American men, addressing academic and social challenges they may face.

There are more than 300 student-run chapters across 28 states in the US.

“Right now, we’ve been going through a lot of information they’ve sent us,” Horton said. “The last couple of weeks we’ve been focused on issues on campus in regards to race.”

Every SAAB chapter includes both an academic advising and a mentorship program to benefit members.

Horton said that the Southwest Florida Community Foundation, a local organization dedicated to investing in charities, as well as awarding grants to community members, to create a SAAB chapter at FGCU, contacted his office.

“We’ve been working with people there,” Horton said. “We’ll work our students and faculty and various organizations here on campus to make sure we can recruit students to the program.”

While SAAB caters toward African-American men, Horton wants to make sure that black female students have the same opportunities.

Horton believes that in light of the recent whiteboard incidents on campus, it’s important for black students at FGCU to be heard and to have the opportunity to excel.

“When the voice of the black students is (sic) raised, it really empowers the voice of all students,” Horton said. “It becomes critical that everyone becomes part of the conversation.”