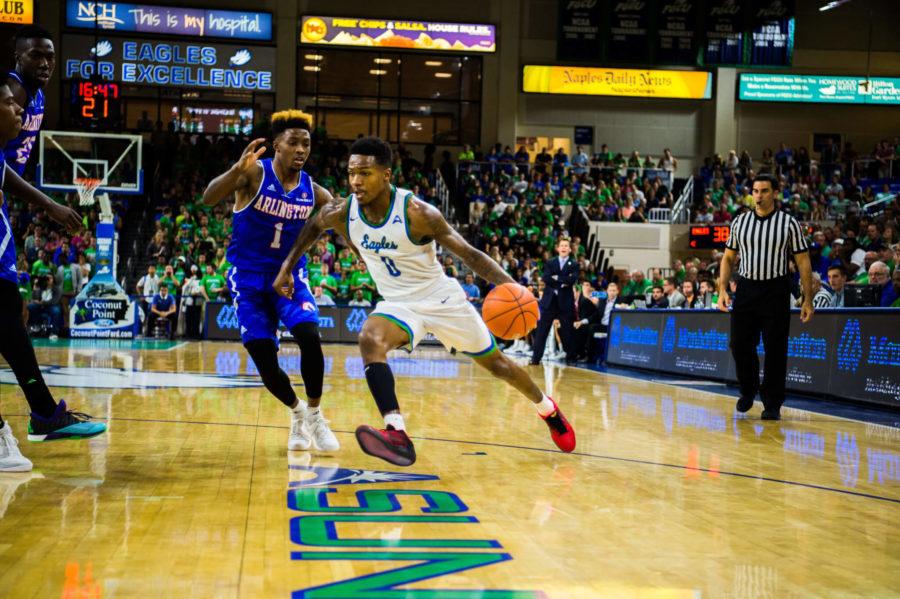 In its first game back at Alico Arena following its controversial 78-77 loss against then No. 13 Michigan State, the FGCU men’s basketball team defeated Binghamton 69-53, sparked by a season high 23 assists.
In his first game back after breaking his left hand prior to the 2016-17 campaign, Marc-Eddy Norelia finished with five points in nine minutes of action, knocking down his first collegiate three-pointer to cap off the Eagles’ 7-22 shooting from behind the arc.
“I’m just excited because of all the hard work I put in,” Norelia said. “That’s the satisfaction of it, going out there and expressing myself because I love playing basketball and that’s why I express my feelings.”
Despite a quiet shooting performance from leading scorer Brandon Goodwin (five points and five assists), the Eagles were led by Christian Terrell (12), Antravious Simmons (10) and Rayjon Tucker (10) who combined for 32 points.
Scoring all of his 12 points from behind the arc, Terrell went 4-6 from long range en route to FGCU’s 15-point victory.
“I just took open shots, and they were falling tonight — nothing really special about it just business as usual,” Terrell said.
FGCU quickly found its rhythm on offense against the Bearcats, riding a 9-0 run capped off by a slam dunk by Demetris Morant to jump to an early 15-2 lead in the first half.
Shooting 48 percent from the field in the first half, the Eagles held Binghamton to 28 percent from the field and 8.3 percent from long range.
In the dying seconds of the half, Zach Johnson knocked down a half-court buzzer beater to give the Eagles a 39-21 lead at the half, but after officials reviewed the play, Johnson held on to the ball for just a second too long, giving FGCU a 36-21 lead going into intermission.Opening the second half with a 7-0 run with the help of Terrell’s third three-pointer of the night, the Eagles quickly jumped to a 20-point lead, 43-23.
FGCU scored a season-high 42 points in the paint, thanks to multiple alley-oop slams by Tucker in the second half, as the Eagles exploited Binghamton’s zone defense.
While the Eagles continued to roll on offense much like they did in the first half, their play on the defensive end went from good to ugly, allowing the Bearcats to shoot 48 percent from the field after holding them to just 28 percent in the first half.
“I thought defensively in the first half we were pretty good,” FGCU head coach Joe Dooley said. “Last ten minutes of the game, they were plus nine because I don’t think we guarded at all.”
Shooting 32 percent from behind the arc, Norelia knocked down the first three-pointer of his collegiate career, knocking down the Eagles’ seventh triple of the game en route to their 69-53 victory over Binghamton.
The Eagles will now face Long Beach State on Friday, Nov. 25, in the second of their three-game home stand.
“They’ve played just as hard of a schedule that we have,” Goodwin said. “We have to come out with the same enthusiasm we had in the first four games. Tonight, we were kind of sluggish, like coach said, and we have to pick up our pace and regroup tomorrow in practice.”