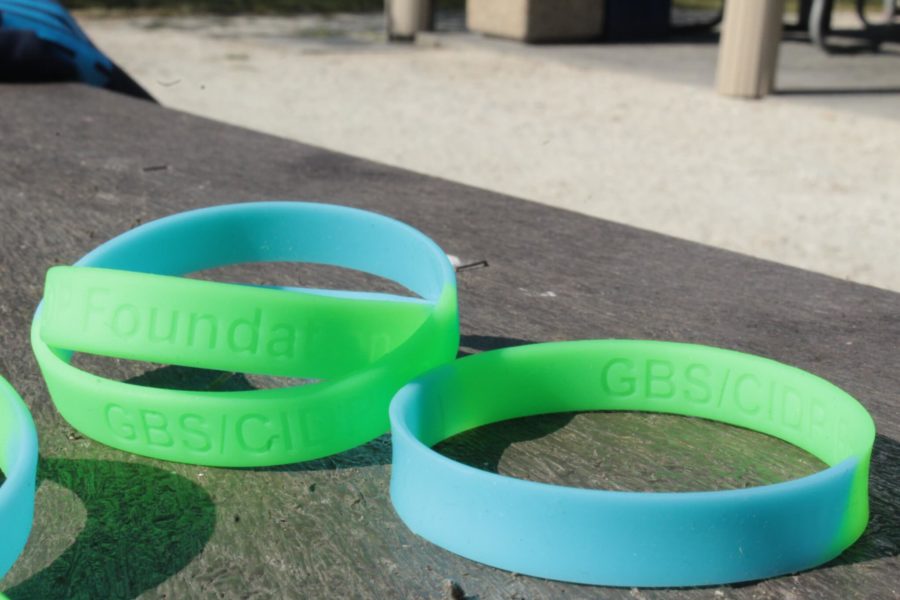 While patrons of the Walk and Roll were busy racing along the winding path at Lakeshore Park, Ileana Hamel was taking her time, rolling by in her motorized wheelchair.
Hamel was diagnosed with Guillain-Barré Syndrome (GBS) three years ago. She explained how she became ill with pneumonia and later suffered through a coma– all due to her condition which left her body temporarily paralyzed.
Hamel lifts her left leg up a few inches and smiles, saying that despite her condition, she is making progress to get her body moving again.
GBS is an inflammatory disorder of the nerves that is capable of causing paralysis throughout the body while CIDP (Chronic Inflammatory Demyelinating Polyneuropathy) is a similar disorder that’s characterized by reflex loss.
Both disorders have the ability to restrict movement and paralyze those afflicted with it, but that didn’t stop more than 50 participants from walking to raise awareness for CIDP and GBS at the second annual Walk and Roll.
Among those who participated were the FGCU Physical Therapy Association including but not limited to Dr. Rose Pignataro and more than 15 students who, according to Kevin Lynch, came to volunteer and show their support. Others were either diagnosed with CIDP/GBS, or had friends and family who were, like Lori Monserrat.
Monserrat is a friend to Kristy Vaughn, the Walk and Roll organizer and FGCU alumni who lives with CIDP. Monserrat doesn’t have either of the disorders, but she explains how challenging it was to see her friend, Vaughn, go through something so debilitating.
Vaughn was diagnosed with CIDP in 2014 and has since gone into remission. She receives infusions to help with her condition and has progressed to the point where she is able to do one-mile walks without the aid of a cane or walker.
“When I first noticed that she had challenges walking, it was scary to me because I saw my young, beautiful and vibrant friend struggling to walk,” Monserrat said. “It’s horrifying to see anyone who all of a sudden is healthy and then has this come on.”
According to Monserrat, within a matter of months Vaughn went from subtle shaking to some walking issues before her condition worsened enough to need a cane. She also said that because there is very little known about GBS and CIDP, it took Vaughn what felt like a year to find out what was wrong with her in order to treat it.
Donna Holden went through a similar ordeal. She was diagnosed with CIDP in 2007. It started off slowly. She wasn’t able to get up steps, but she now does infusions to assist her nerves and wears braces on both legs to help with circulation.
At the walk, her family – including her daughter – and friends came out to show their support and walk with her.
“You can’t do this lifestyle without all your family and your support,” Holden said. For her, walking with others who shared her condition created a great opportunity to meet people while raising awareness.
The walk began at 10 a.m., and people of all ages managed the mile-long trek while students encouraged those like Hamel and Holden along the way. For some, the walk was hard but for those like Holden, it was a liberating experience that made her feel great to have done it.
For those like Monserrat, walking helps bring awareness and all she asks is that people become more aware of what others are going through when it comes to health.
“Be aware that it (CIDP/GBS) exists so that people can get to the bottom of their symptoms faster and support those who are affected. You never know what’s going on in a person’s life…,” Monserrat said. “When you’re healthy, you take it for granted.”
[Best_Wordpress_Gallery id=”46″ gal_title=”CIPD Walk 2016″]