Programming Board seals annual Winter Wonderland “with a snowball” 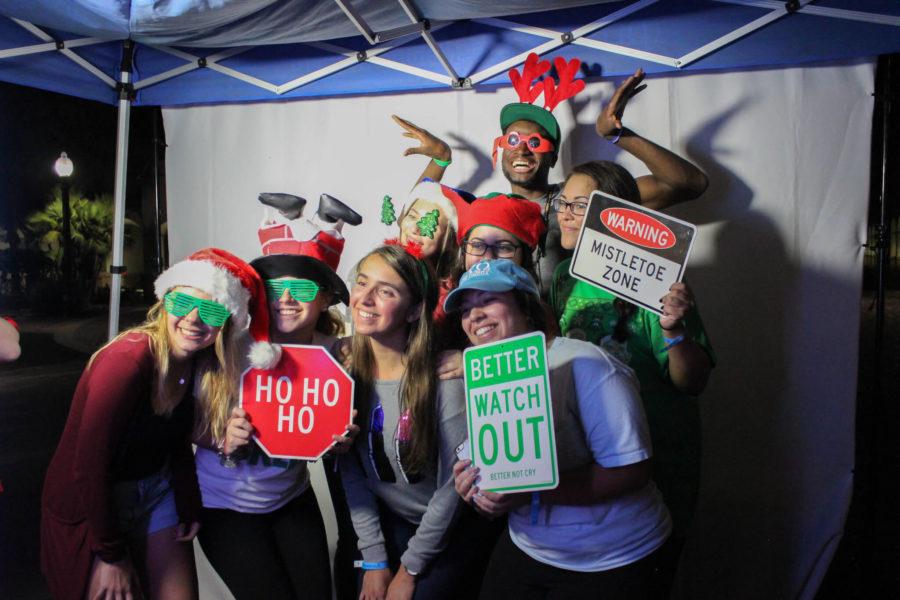 Filmed and edited by Rachel Iacovone.
Winter Wonderland has become a fall finals season staple at FGCU. The event, which attracts a larger crowd each winter, drew in more than 1,000 students Thursday night for some de-stressing in the face of their upcoming finals.
“You can just hang out — definitely take a break because a lot of students are here at the library, so you can just come downstairs,” said Jade Higgins, a sophomore.
Programming Board birthed the Library Lawn event four years ago, just as FGCU men’s basketball put the university on the map as Dunk City. With the following increase in enrollment, the event’s location has had to spread out to include the Student Plaza and the parking lot in front of Cohen Center to accommodate the crowd. This year, the plaza also hosted multiple carnival tents to keep the growing line occupied through games and possible prizes that totaled nearly $1,000 in value.
The line, which stretched from Howard Hall to Parking Garage 3, began at the lighted tunnel connecting FGCU to the simulated winter haven beyond. Upon entering, students were greeted with a flurry of faux snow, which caught the light coming from the delicate string of globe bulbs that hung overhead.
Many paused in the tunnel to take selfies or nervously ask a passerby to snap a group picture of them and their friends — only to look at the photo, shake their heads with a “way too blue” and move onto the shifting-color tree at the center, which became the photo hotspot of the night.
“The school always holds a great Winter Wonderland every year, so I wanted to go out, meet some new people, have some fun, get some free stuff,” said Kayla Crain, a junior and third-time Winter Wonderland goer.
Besides the stuff-your-own stuffed animal station, which Crain and many other attenders said was their favorite part, PB’s traditions committee also had an airbrush tattoo stand, DIY salt scrub station, bounce house, trampoline station and photo booth as well as the new addition of a snow pit and the miniature train ride to get there.
Students could also munch on their decorate-your-own gingerbread creations or the offerings from Cape Coral food truck Kreips & Juice to the live music provided by Fly by Midnight at the Veterans Pavilion.
[Best_Wordpress_Gallery id=”48″ gal_title=”Winter Wonderland 2016″]