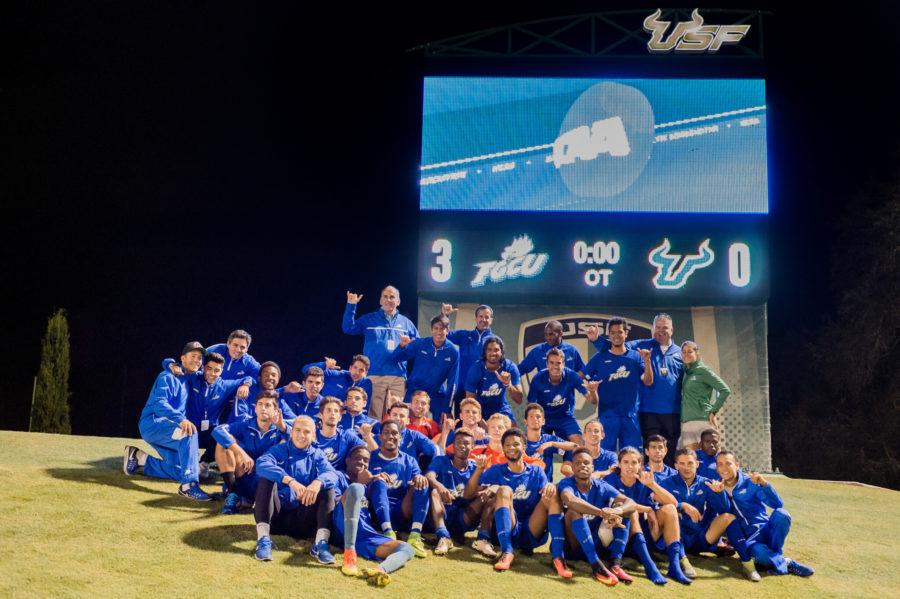 On the eve of its record-breaking season, the FGCU men’s soccer team coaches have been selected as the National Soccer Coaches Association of America Southeast Region Staff of the Year.
Guiding the program to its first ever NCAA Tournament second round appearance, a single-season record 14 wins and their fourth Atlantic Sun Conference Championship, program founder and head coach Bob Butehorn, assistant coach Joe Dincecco, assistant coach Henry Apaloo and volunteer assistant coach Eduardo Villarreal will be honored at the College Coaches Awards Reception on Jan. 12.
“This award and honor is all about the coaches and staff I have around me, and I’m extremely grateful and appreciative of all their work and contributions to our program,” Butehorn said to FGCU Athletics. “Their dedication and commitment to making our players better on and off the field every day is truly admirable, and I could not be more proud to share this honor with them.”
En route to their 14-4-3 overall record, the Eagles led the nation in goals (62), points (179), goals per game (2.95) and points per game (8.52). Earning a program-best No. 11 ranking in the NSCAA poll on Oct. 18, FGCU’s nation-leading offense propelled the then nation best 10-game win streak and a national ranking for the final eight weeks of the 2016 campaign.