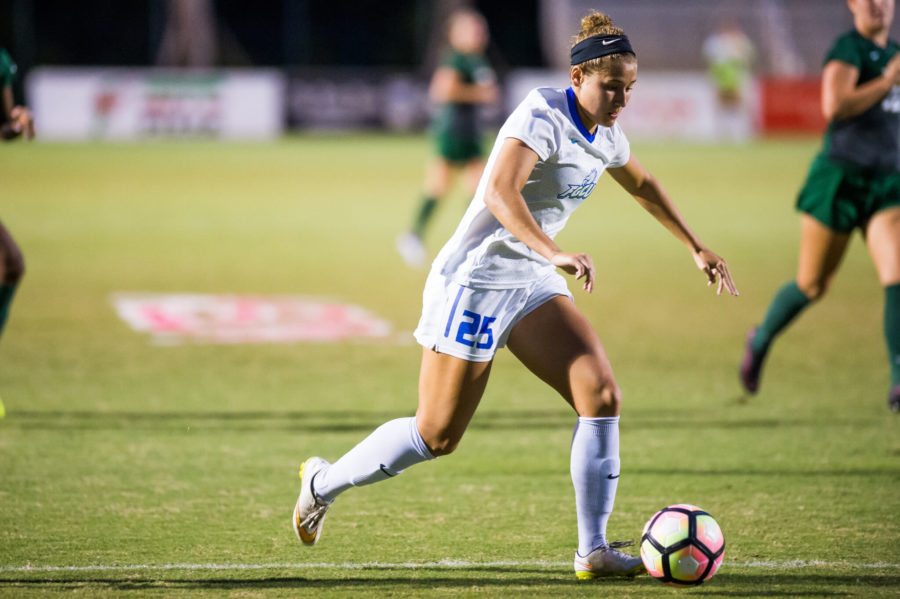 FGCU women’s soccer player, Tabby Tindell has earned All-American honors, placing on the Third Team, announced by the National Soccer Association of America, for the second time in her career.
Tindell was named a Second Team All-American by College Soccer News, but now becomes the first FGCU soccer player to earn the honors from NSCAA.
The forward leads the ASUN in goals (66) and points (162). This season, she led the league even after suffering an injury, with 14 goals and eight assists en route to earning her third Player of the Year honor.
“This means a lot,” Tindell said. “It shows how much this team has done and how much Jim has put into the program. It’s really nice to get some recognition for it.”
Tindell also assisted FGCU in earning another undefeated season and its seventh-straight ASUN title, keeping the longest active streak alive in the NCAA.
Even with a 3-0 defeat against Florida in the first round of the NCAA Tournament, Tindell finished her career as FGCU’s all-time assist leader with 30, and had 31 career game-winning goals, the second-most in NCAA history.
The awards Tindell has received throughout her time at FGCU were: Top 10 Forward by TopDrawerSoccer.com, top 30 overall player in the country by TopDrawerSoccer, two-time ASUN Player of the Week and three-time member of TopDrawerSoccer’s Team of the Week.
The FGCU women’s soccer team also placed four players on the NSCAA All-Southeast Region teams.
Among the four, Tabby Tindell and Paulina Speckmaier earn the First Team All-Southwest Region honors for FGCU. Ashley Parks was awarded with a Second Team selection, while Ali Rogers was selected to the Third Team.