FGCU students awarded for their work with underprivileged youth 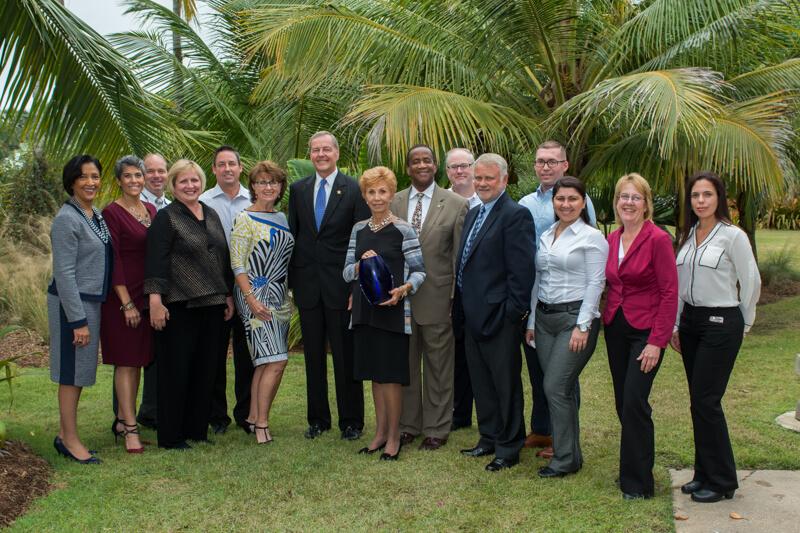 Members of JWOI, FGCU President Wilson Bradshaw, and other distinguished members pose for a group photo at the Paragon Award Ceremony. FGCU student and JWOI mentor Elizabeth O’Dell was also present to get recognition for the work done in service of youth in Collier County. (Photo courtesy of Alisa Coccari)

For a young girl lacking the proper mentorship, ideas of becoming a doctor or a performer may seem like distant dreams, but thanks to the effort of FGCU students those dreams are closer to becoming a reality.
FGCU students that were part of the Junior Women of Initiative mentoring program paired with a senior capstone program to create a curriculum for mentors that would help future students. As a result, they were recognized at the Paragon Award Ceremony alongside FGCU President Wilson G. Bradshaw  and other prominent leaders in Collier County on Dec. 1 at the Naples Botanical Garden.
Each year, the Boys and Girls Club of Collier County hosts the ceremony which recognizes members of the community who have made great strides to help the foundation and the impact they have made on youth.
Elizabeth O’Dell, Missy Salomon and their team were recognized for their hard work in creating a new curriculum and committing to a foundation where their impact can be seen by the community through their youth which O’Dell described as a great experience.
Over the summer O’Dell,  Salomon and several other FGCU students paired with Tasheekia Perry, founder of the Crowning Daughters for Success which empowers young girls in the Dunbar area.


At the event, both O’Dell and Salomon expressed that they wanted to continue their work with the youth of Southwest Florida and with Perry. This semester, they were able to take their summer project to the next level.
O’Dell and Salomon helped a mentoring program called JWOI, a program created in 2005 by Kelly Capolino, that focuses on the growth and impact of both mentors and mentees from the ages of 13 through 17 through bi-weekly sessions covering topics ranging from etiquette to empowerment.
As a mentor with the program, O’Dell wanted to create a new way for mentees to connect with their mentors and did so by creating a book to help underprivileged students as part of her Civic Engagement class with Civic Engagement instructor Courtney Satkoski.
Along with Satkoski’s Integrated Core Senior Seminar course, O’Dell and others were able to leave a lasting impression on the Boys and Girls Club and the students.
According to O’Dell, the curriculum was developed and printed without a budget to the JWOI or the Boys and Girls Club and took a total of six students in each class to bring the idea of curriculum into a book which then took months to finish.
The book takes Boys and Girls Club alumni America Gutierrez’s artwork and uses it to help students relate to what they are learning. It also features two separate copies, with 13 different lessons, for both boys and girls.
“We had FGCU students write the curriculum based off of a dated version of it,” O’Dell said. “The Integrated Core Senior Seminar course kids came out to the club several times to find out what the needs of the mentoring was, and they went from there.”
To make the book, O’Dell said that Gutierrez’s artwork was incorporated with the curriculum created by the Integrated Core Senior Seminar course students. Everything was then uploaded into Adobe which she and others had to learn. Once putting everything into order, 57 books were printed and hand-bound by O’Dell.
When talking about the work put into create a long lasting project, O’Dell said the work was tedious and she experienced bouts of frustration when items weren’t printed the correct way, or aligned wrong, but that the work was well worth it.
“The book is created in a way that enables mentors and students to move pages around if they need to a make their own curriculum,” O’Dell said, “And that’s what makes it timeless. It also proves that you can do some big projects for Civic Engagement.”
For Satoski, seeing her students pair together to accomplish a project like this and be awarded for it showed how passionate they were about it and helping the youth in the program.
She quotes Josh Shipp saying, “Every kid is one caring adult away from being a success story,” and what the students of both the Civic Engagement class and the integrated core senior seminar course did will create that impact.
“What was most impactful was how much thought, time and research they placed into the development of the curriculum. They wanted to create something that provided resources and talking points to begin the conversation about issues the mentees are facing today and they did that,” Satoski said.
Delete Image
Align Left
Align Center
Align Right
Align Left
Align Center
Delete Heading