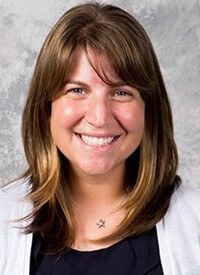 A student-athlete goes down on the pitch and grabs her knee as Assistant Athletic Trainer Alyssa Romasco sprints on the field to aid the hurt player, thinking about the injury she could have sustained and the road to recovery ahead.

Romasco, a native of Gilbertsville, Pennsylvania, works with student athletes who sustain season-ending injuries while performing in their respective fields.

“Season-ending injuries are pretty intense,” Romasco said. “It’s a long process, there’s obviously a physical and then a mental component, so it’s kind of a balancing act.

Romasco said when student-athlete get hurt, they can experience some stress as a result of not feeling a part of the team, and it’s a part of her job to recognize those signs and make sure the athletes stay on track with their physical demands.

Although she’s worked with various student athletes, Romasco recalls working with men’s soccer player, Arion Sobers-Assue, who tore his meniscus in his left knee his freshman year and tore it again before the start of his sophomore year.

“Arion worked with several of our athletic trainers,” Romasco said. “For knee injuries, there’s a lot of components that you are trying to get back. As you get further along into the rehab process, you may try to make it a little more sport specific. For him, as a soccer player, a lot of the focus was helping his awareness when cutting.”

Sobers-Assue made his full return to the team in May and made an immediate impact, starting 15 games, scoring 11 goals and providing 11 assists.

“Alyssa (Romasco) helped me with little small details that I didn’t pay attention to,” Sobers-Assue said. “It made it a lot easier on me so I could just focus on doing the physical aspect of things. Even when I didn’t want to do it, they still made me do it because they knew it would benefit me in the long run.”

Making it to the second round tournament of the NCAA College Cup for the first time in program history, Sobers-Assue said that it was everything he had been waiting for, having the opportunity to play with his teammates and affect his team’s results with his play on the pitch.

Tearing her ACL on Sept. 10, freshman volleyball player Ciara DeBell started all nine of the games she played in before injuring herself in a game against Indiana.

DeBell said she didn’t have surgery to repair her injury until 12 days later.

Romasco said that with knee injuries like a torn ACL, it’s important to do prehab before the surgery to reduce swelling and to bring range of motion back to the knee.

“The first two weeks were hell,” DeBell said. “I can’t really do much and it’s very frustrating. It was challenging and I’m doing really well now.”

DeBell now has full mobility back in her knee and has rehab for at least an hour every day. She recently began to do squats and lunges to go along with her constant biking.

DeBell said it has been difficult to watch her team from the sidelines after enjoying success in her first nine games. However, she has enjoyed seeing her team make history in her absence.

“My team is my second family,” DeBell said. “I’m really proud of my team. and how they’ve done. We We’re able to actually get past the first round of the ASUN tournament for the first time since 2009.”

DeBell has plans to return to the court in March, hoping to play beach volleyball in the spring.

Romasco said once DeBell gets further down the line in her rehab, she and her staff will begin to incorporate more sport-specific exercises.

“If she gets further down the line, we try to start incorporating it a little more sport specific to volleyball knowing that the jumping is going to be a huge factor, as well as her landing mechanics,” Romasco said.