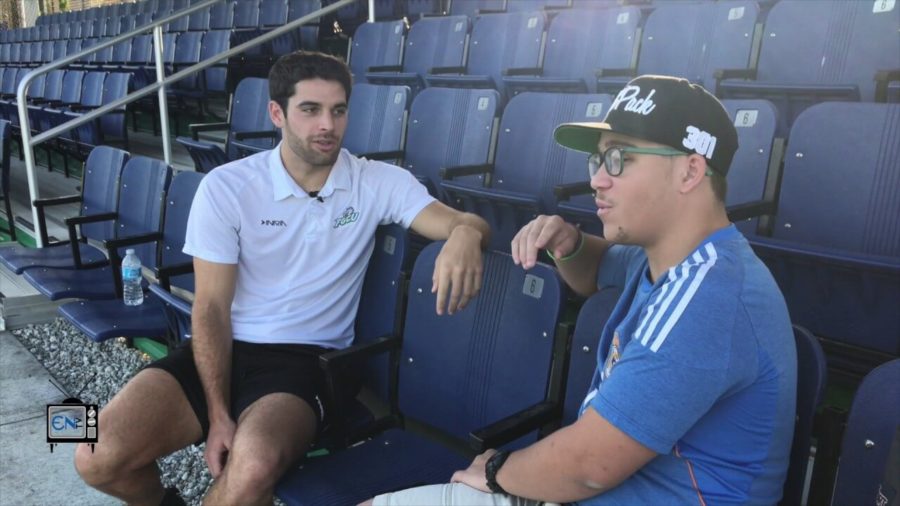 Filmed and edited by Katie Hopkins.
Albert Ruiz walks across the pitch without a care in the world.
Taking the same field as he has done time and time again from his youth, to his career with the FGCU men’s soccer team, Ruiz seems calm after experiencing feelings of euphoria and disappointment on the pitch through the 2016 season.


Ruiz, a Barcelona, Spain native, led a historic season for the FGCU men’s soccer team, propelling the team to the second round of the NCAA College Cup for the first time in program history and its highest national ranking – No. 11 — while leading the nation in scoring with 22 goals.
“In Spain, you play soccer since you are 0.1 years old,” Ruiz said. “The first day you are probably going to get a soccer ball. I started really, really young, I can’t even tell because I don’t remember.”
One of the most decorated nations in the world of soccer culture, a FIFA World Cup winner in 2010 and a UEFA Euro Cup winner in 2012, Spain and its population as a whole are well-known around the world for their love for the game of soccer.
“In high school, in between classes, you always played games,” Ruiz said. “You might play a least two games a day.”
Ruiz said in high school, classes were always divided into A, B, C and D, and they took the divisions to make teams when they played pick-up games.
“My class was always B,” Ruiz said. “B was always trying to kick ass in high school, and we were able to do it.”
Although the country and the players who played professionally in Spain itself might influence kids to play soccer, Ruiz said his family played a big role in his passion for the sport.
“My Grandpa went to every single one of my games since I was 16 years old,” Ruiz said. “When I was really, really young he teached [sic] me how to kick the ball with my left foot, and when you are young you don’t even care.”
Finding the back of the net on 22 separate occasions throughout the season, Ruiz scored multiple goals with his non-dominant left foot, scoring both of his goals with his left foot in the Eagles 3-2 victory against Lipscomb in the semi-finals of the ASUN Soccer Championship which the Eagles went on to win.
“I told him [my Grandpa] the other day, because against Lipscomb I scored twice, I’m really thankful that you teached [sic] me how to kick the ball with my left foot when I was 8 or 7 years old because now you see what happens,” Ruiz said.
Along with the support from his grandfather, Ruiz said his family always supported him “200 percent.” Ruiz said his family pushes him on and off the field.
In his last year living in Barcelona, Ruiz said he, as an individual, and as a team performed very poorly.
“I actually quit soccer,” Ruiz said. “I made the decision to stop playing because someone said I was not good enough and I gave up.”
Although Ruiz hung up his cleats and put his playing days behind him, the opportunity to come to FGCU was brought to his attention.
“The opportunity to come here [FGCU] came through some agents and some people who wanted me to still play,” Ruiz said. “I will always be thankful to coach Bob [Butehorn] because I was at zero three years ago, but now, I’m in a pretty good position to make my dream a reality.”
Leading the Eagles frontline to the highest scoring offense in the nation with 62 goals, FGCU held the highest win-streak in the nation, reaching 10 while being ranked No. 11 before losing to UNF 3-2 at home.
The Eagles went on to win the program’s fourth ASUN men’s soccer title with a 3-2 victory over Jacksonville. Facing USF in the first round of the NCAA college cup, FGCU advanced to the second round of the tournament for the first time in program history defeating the Bulls 3-0 in penalty kicks after playing to a 2-2 draw, before falling to UNC in the second round 3-2 in overtime.
“This season means everything, individually the best season of my life and as a team the best season in program history,” Ruiz said. “I can say that I am a part of something everyone will remember and I’m really, really proud of everyone.”
For more episodes of Beyond the Nest, click here: https://eaglenews.org/category/en-tv/entv-sports/beyond-the-nest/
Delete Image
Align Left
Align Center
Align Right
Align Left
Align Center
Delete Heading