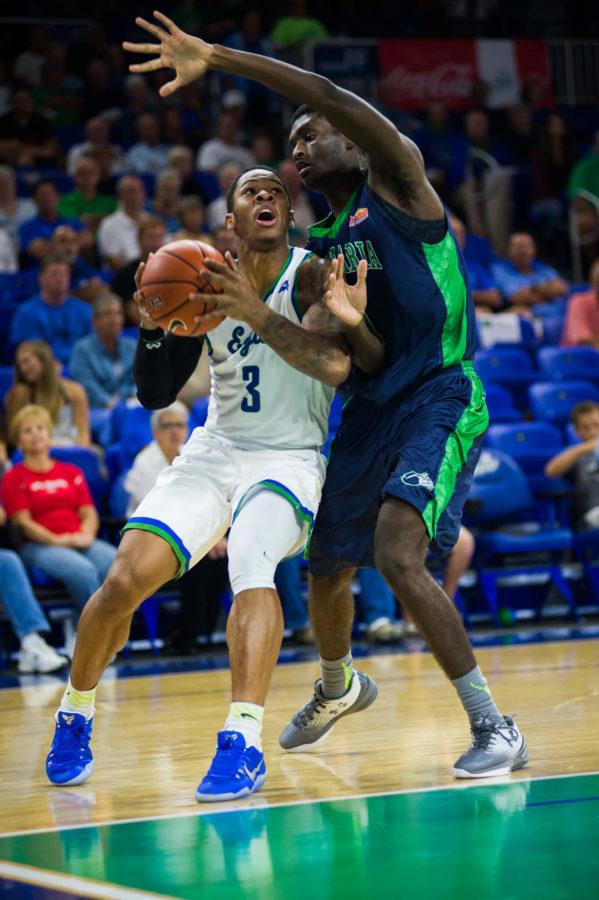 Kicking off game one of a three game home stand, the FGCU men’s basketball team defeated Siena 73-69 to increase their win-streak to five games, and remain unbeaten at Alico Arena.
Holding a 15-point lead with 6:24 left in the second half, the Eagles allowed Siena to spark a four minute long 11-0 run, cutting their lead to four, 67-63, with 2:41 remaining in the half.


After a pair of free-throws from Marc-Eddy Norelia and a dunk from Demetris Morant to help counter the Saints buckets at the other end, Siena nearly regained possession after going 2-2 from the line on the ensuing inbound by Christian Terrel,l but Zach Johnson recovered and got fouled.
Going 5-14 from the line in an offensive off-night, Johnson knocked down his second free throw to give FGCU a 72-69 lead with 20.4 seconds left to play.
In what turned into a one-possession game, the Eagles got the final stop to ensure their fifth-straight win after Siena missed its three point attempt. Out of the Eagles’ timeout, the Saints nearly stole the ball on the inbound, tipping the ball out of bounds and shaving the clock to just 2.0 seconds.
On the following inbound, Terrell found Johnson who was fouled and sent to the line. Johnson split his shots from the stripe for the second time in under a minute to put the final nail in the coffin and give FGCU a 73-69 victory over Siena.
“I thought we had some good spurts to begin the game, and then I thought the last 14 minutes were about as poorly as we’ve played since we’ve been here,” FGCU head coach Joe Dooley said. “It was embarrassing. You’re up 17, you can’t just stop doing what got you there.”
Morant lead the Eagles’ offense despite a sloppy finish across the finish line, scoring a career-high 16 points, making the 10 of the Eagles’ first 18 points in the first half.
Complimenting Morant’s career-high effort, Brandon Goodwin scored 14 points on 5-5, shooting from the clip.
In a high-paced back-and-forth game, in what seemed like a playoff game atmosphere at Alico Arena, the Eagles rode high percentage shots on the floor and a double-digit performance from Morant to 73.1 percent shooting from the field.
Driving to the paint and getting buckets with ease to go along with strong play on the defensive side of the floor, FGCU knocked down 14 shots in a row en route to a 45-32 lead at the half.
The second half proved to be a whole new ball game, as the Eagles started to leave points at the stripe, sucking the wind out of the crowd’s sails with each missed free throw attempt.
Despite holding a comfortable lead before Siena made its run, the Eagles couldn’t get the offense moving the same way they did in the first half, shooting 38.1 percent from the floor on 8-21 shooting while going 10-19 from the charity stripe.
FGCU will now take on FIU at Alico Arena at 8:15 p.m. on Sunday, Dec. 11 in game two of its three-game home stint.
Delete Image
Align Left
Align Center
Align Right
Align Left
Align Center
Delete Heading