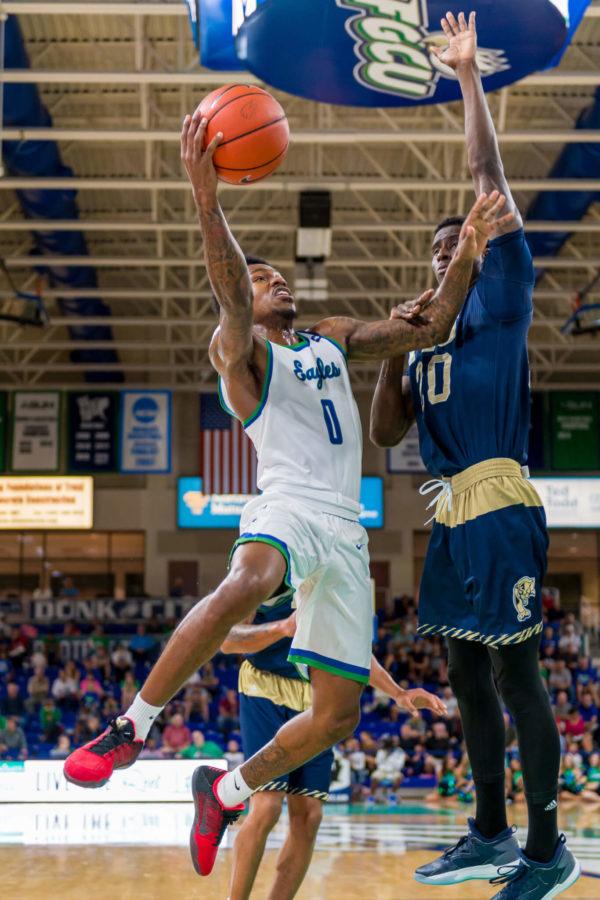 
The men’s basketball team beat FIU Sunday night to earn their sixth-straight win of the season, improving their overall record to 7-3. This game also marked the fourth-straight time the Eagles shot better than 57 percent from the floor and had five players in double-figure scoring.
Brandon Goodwin continues to be a stand out and for the sixth time led the team offensively with 18 points. Christian Terrell was close behind with 14 points, while newly-returned Marc-Eddy Norelia totaled 13 points.
Both RaySean Scott Jr. and Rayjon Tucker tallied 10 points, assisting with the final score of 82-63 in favor of the Eagles.
With an already impressive shooting percentage from the floor of 51.7 percent, FGCU continues to excel offensively, increasing their percentage on Sunday night against FIU to 58.2 (32-55). The team also tallied 18 assists, led by Reggie Reid who had five on the night.
Defensively, the Eagles limited FIU to a 38.5 shooting percentage (20-52), with an 11.1 percent (2-18) from 3-point range.
To start the game, the Eagles quickly got out to an 11-0 lead after a Goodwin jumper and continued to dominate from there.
FGCU led by double figures most of the night, and by as much as 27 in the second half and never allowed FIU to come back into the game.
In addition to the 46 paint points, the Eagles also knocked down eight 3-pointers (8-18).
Coming into the match, FIU had out-rebounded every single opponent this year, including #20 South Carolina, and entered the game with a +8.9 rebound margin. However, the Eagles’ defense controlled the paint.
This strong defense was led by a game-high eight rebounds from redshirt senior Demetris Morant.
The impressive 19-point win was even more notable for FGCU, considering the starting duo of Zach Johnson and Antravious Simmons combined scored just two points. The two came into the game averaging 21.8 points per game.
Next, the Eagles will face Georgia Southern for the second time in 10 days on Tuesday, Dec. 13 at 7 p.m. at Alico Arena. Last game, the teams met in Statesboro, Georgia, with FGCU claiming an 85-82 win.
Delete Image
Align Left
Align Center
Align Right
Align Left
Align Center
Delete Heading