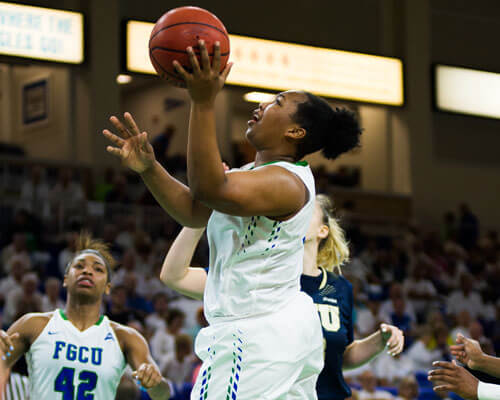 Coming off of a 65-50 win over FAU on Dec. 11, the FGCU women’s basketball team extended its win streak to four, with a 67-41 victory over North Carolina A&T.
“Fortunately, we played pretty good defense, so we made it tough for them to score,” FGCU head coach Karl Smesko said. “Offensively, we didn’t execute very well. We obviously didn’t shoot very well with the exception of (Taylor) Gradinjan, who shot it very well tonight. She came up big for us. Jessica Cattani started making good passes against the zone and finding people behind the zone to get us some easy baskets. I thought Tytionia (Adderly) did a good job for us off the bench. We were having some trouble rebounding, and when we put her in she did a great job on the boards and was able to get us a couple baskets.”
Leading the Eagles offense in their 67-41 victory, Gradinjan scored 16 points thanks to five daggers from behind the arc en route to FGCU shooting 40 percent from the field.
Defense was the biggest storyline for the Eagles in their fourth straight win, limiting the Aggies to 28 percent shooting from the field and 7.7 percent from behind the arc, while outrebounding them 48-33.
Thanks to a trio of threes from Gradinjan, Haley Laughter and Rosemarie Julien, the Eagles jumped out to a nine-point lead earlier in the contest. Maintaining a nine point lead for the majority of the first quarter, Whitney Martin knocked down a lay up to cut the Aggies deficit to seven, as they went into the second quarter down 16-9.
Opening the second with back-to-back threes from Gradinjan, the Eagles padded to their lead early-on. Riding ten points from Gradinjan, FGCU allowed the game to remain close before the half, throwing the ball away seven times in the second quarter alone en route to a 29-19 lead at the break.
Coming out of the intermission, the Eagles continued to ride Gradinjan’s hot hand, as she knocked down her fourth triple of the game in the third, giving FGCU a 14-point advantage early in the third quarter.
Beginning the fourth with a 20-point lead FGCU went on an 11-1 run thanks to triples from Cattani and Jordin Alexander. Scoring just 14 points in the final quarter, the Eagles held the Aggies to just eight to move them to 1-8 on the season, defeating them 67-41.
After a quick one game home stand at Alico arena, the Eagles will travel to face Big Ten member Illinois for the first time in program history on Saturday, Dec. 17 at 3 p.m.
Delete Image
Align Left
Align Center
Align Right
Align Left
Align Center
Delete Heading