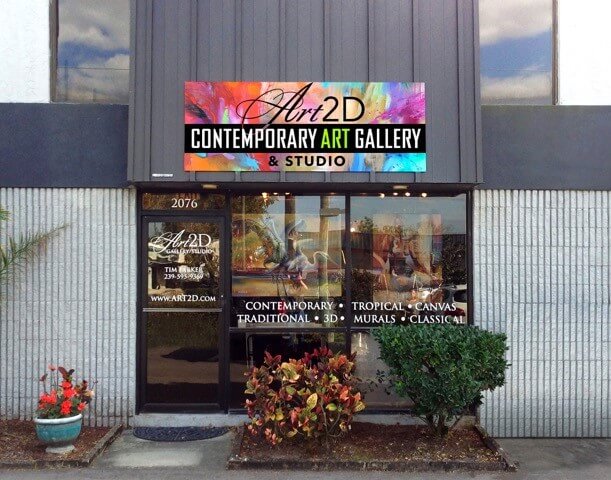 When Denise Parker and her husband Tim Parker moved to Naples in 2003 from New York, neither would guess that Tim’s artwork would later be helping Florida wildlife, especially wolves.
The couple, who spends their time working at the gallery, also contributes to the community through art.


“We recently donated work for the Lee County Homeless Coalition and the Search and Rescue,” Denise Parker said. “We are often contacted by different organizations, and Tim is always happy to donate for fundraising events and dinners.”
This past week, the Parkers opened their doors at Art2D to host a couple of Shy Wolf’s wolf-dogs, along with volunteers and guests, for a fundraiser that would help the Shy Wolf Sanctuary in Naples.
Shy Wolf is a non-profit organization known for being the home to more than 20 different animals ranging from arctic foxes to prairie dogs, but is most known for the wolves and wolf-dogs that call the sanctuary home.
The sanctuary lies in the backyard of founder Nancy Smith who has created an enclosure for the animals that she calls her family.
On Dec. 14, Shy Wolf paired with Art2D to put on a fundraiser that would not only raise awareness to the public about the sanctuary and what it does, but also inform the public about wolves and other exotic animals as pets.
The event was hosted by Denise Parker and her husband, Home & Design’s featured artist Tim Parker, at their gallery location in Naples where they invited artists like Tony Hansen to participate.
Denise Parker said that she thought of the idea of partnering with Shy Wolf to do a fundraiser after she made a visit to the sanctuary herself.
“My husband says that I have a wolf radar because I somehow found the sanctuary when we moved down here in 2003,” Parker said. “And when I went over for a visit I was so impressed with what they did.”
She also said that because she and her husband owned the gallery where they work, it would be a great opportunity to host a fundraiser where they could allow guests to interact with the animals.

This meant that Shy Wolf’s ambassador wolf-dogs, like Sabel, were able to make themselves comfortable, and guests were able to see first-hand what a wolf-dog looks like and learn about the importance of straying away from purchasing or adopting exotic animals.
“They brought in the wolf-dogs and people were able to touch, pet and get kisses from them,” Parker said. “I like that kind of atmosphere because I could let them (Shy Wolf ambassadors) come in and be there to meet people.”
Throughout the event, guests were educated about the work that Shy Wolf does while also raising money through art by both Hansen and Parker.
“Between the 45 and 50 people came and we raised a little more than $800 from the event,” Parker said. “Wednesday nights are tough in Naples at this time of the year, but I hope next year will be even better.”
Parker said that exposure to this sanctuary was important especially for those who live in the area but may not have any idea about the sanctuary that exists only miles from their homes.
“Any opportunity to explain about Shy Wolf and what they do helps,” Parker said. “They have a lot of needs and they give back too. They’re providing sanctuary for these animals that they’ve rescued and giving back to the community by educating people.”
Parker expressed hope that continuing her work with Shy Wolf and educating the public would allow her to gain the support that Shy Wolf needs to continue their work and hopefully expand.
She also says that the next step is to host an event still in the works that she calls Bark in the Park.
“If I have the opportunity to spread awareness and help the sanctuary, I hope we can do that,” Parker said.
Delete Image
Align Left
Align Center
Align Right
Align Left
Align Center
Delete Heading