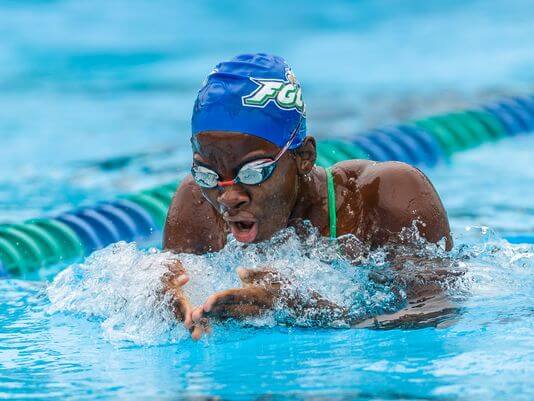 FGCU senior swimmer Evita Leter has been named Suriname’s Swimming Sportswoman of the Year, announced earlier in the week by the Association of Sports Journalists in Suriname.
After being named the top female swimmer in her country, Leter had the opportunity to represent Suriname in the 2016 Rio Olympics. She was also one of three finalists for the Surinamese Female Athlete of the Year award.
“It’s a great honor to be named Suriname’s Female Swimmer of the Year,” Leter said. “Just to be considered for Female Athlete of the Year is definitely an added bonus.”
This past summer, Leter was individually selected by the Surname Olympic Committee to represent her country and competed in the 100 breast.
She became the fifth member of the FGCU swimming and diving program and sixth FGCU student-athlete to ever qualify for the Olympics.
During the Olympic qualification time, Leter performed at her highest level, turning in top times among other Surinamese female swimmers in both the 50 breast (32.44) and 100 breast (1:12.99).
Beyond her Olympic success this past summer, Leter also proved her leadership for the Eagles this 2016 season. She helped lead FGCU to an 8-3 overall record and 2-0 mark against CCSA opponents heading into the holiday break.
Last year, Leter was named the conference champion in the 100 breast after turning in a personal record time of 1:01.10, ranking fourth in program history.