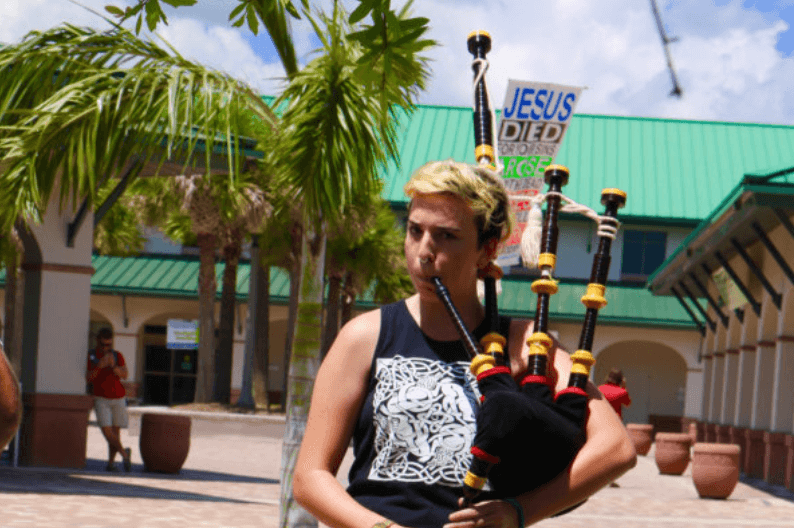 Political science major Brice Ehmig turned heads on Aug. 19, 2016, when she started playing her bagpipes to peacefully protest against comments made by “The Preacher,” a man who has made hateful comments toward Ehmig and other students.


Ehmig’s girlfriend, Gabby Cicolani recorded Ehmig’s protest in a two minute thirty-six second video. This video has spread far beyond the FGCU community, garnering over 300,000 views on Facebook and over 25,000 views on YouTube as individuals voice their solidarity with Ehmig’s demonstration.
Most recently, on Dec. 26, NowThis News has listed Ehmig as second in the “top 20 people who rocked 2016.” The post, entitled “The Sound of Resistance.” highlights not only Ehmig’s courage but also commends her diplomatic approach to the situation as a whole.
“It was an honor [to be among the top 20 people],” Ehmig said in an email. “There’s no reason to sit down and take bullying. It is great to challenge yourself, to step outside of your comfort zone and to have tough conversations with people that do not agree with you, but the only way to fully expunge darkness is by exposing it to the light.”
Ehmig will continue to bring light to FGCU as she completes her senior year this semester.
Delete Image
Align Left
Align Center
Align Right
Align Left
Align Center
Delete Heading