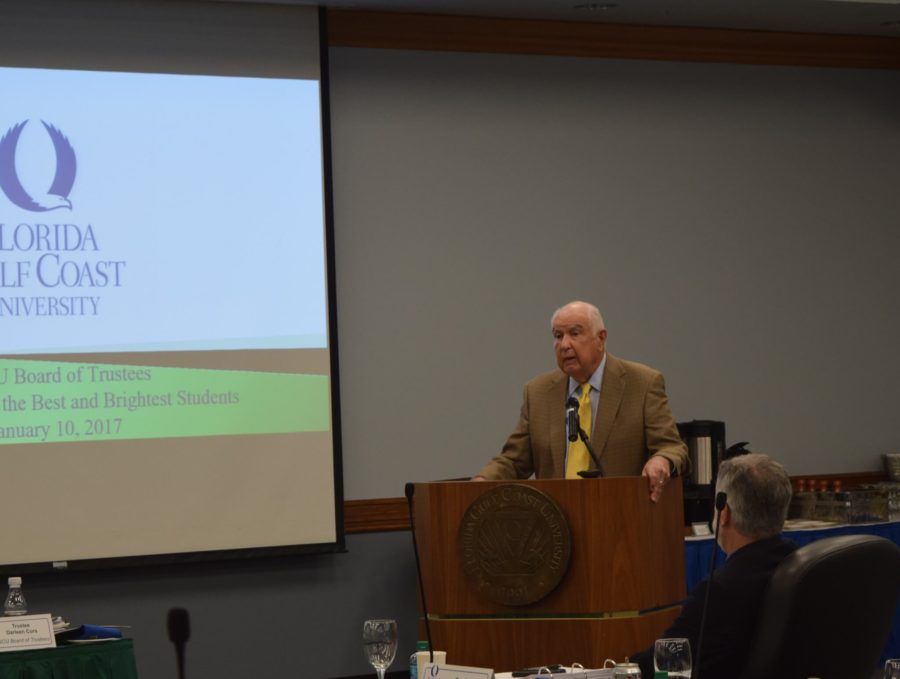 Roy McTarnaghan, FGCU’s founding president, addresses the Board of Trustees during the Tuesday, Jan. 10 meeting. McTarnaghan shared his opinion on the university’s current graduation rate, his experience talking to students about their issues with classes, and how FGCU can move forward and help solve the problem.( EN Photo / Taylor Crehan)

Roy McTarnaghan, the man who quite literally oversaw the creation of FGCU from the ground up, paid a visit to members of the Board of Trustees on Tuesday, Jan. 10.

McTarnaghan, who served as the founding president of FGCU from 1993 to 1999, shared his thoughts on the university’s current graduation rates in front of trustees, faculty, and members of the public.

Before he dove into his criticism, however, he congratulated the school on how quickly it has grown compared to other universities.

“If you look around, and compare us with the kind of other newer institutions, we have come faster and farther than almost everyone else,” McTarnaghan said. “There’s a lot to be proud of.”

He then dove right into his topic.

“My comments are directed to a very small issue, and that is time to degree,” McTarnaghan said.

He explained that FGCU’s graduation rates and the frequent discussion of students graduating in six years rather than four has been mentioned during BOT meetings several times, as well as at Board of Governors meetings.

McTarnaghan then explained that the main issue causing a lengthy time to degree is the lack of available classes at FGCU to certain students.

“I think our advising is very good, we’ve got a lot of wonderful programs,” McTarnaghan said. “But this schedule issue, not the advising, seems to me to be a major stumbling point.”

He said that according to the BOG, the reason that FGCU has issues with time to degree was because the “student quality was too low.”

“I believe they missed the point completely,” McTarnaghan said.

McTarnaghan is currently supporting several students from scholarship funds that he and his family provide to. In an effort to solve the  issue of time to degree at FGCU, he has talked to several of those students, Faculty Senate members as well as leaders of Student Government about their personal problems with class scheduling.

“I believe that we need to back up and look at how people have solved this problem,” McTarnaghan said.
He suggested implementing an advising scenario where students can meet with their adviser in a six or seven week period before a new term starts to determine what exactly the course needs are, and then use that data to mandate the kind of courses and sequence in which they’re offered.
“It’s really important to do a different kind of analysis,” McTarnaghan said.
He explained that while talking to a student who receives financial support from him and his family, he found out that the student, who is a freshman biology major, was unable to enroll in any biology classes because there weren’t any class spaces open for him.
“Interviewing dozens of students, that’s not unusual,” McTarnaghan said.
He pleaded for the BOT to take part in changing the school’s current graduation rates.
“This has got to be fixed, please,” McTarnaghan said. “I’m willing to help.”
After closing his statements, trustees shared their thoughts about the former president’s speech.
“I think he brings wisdom that certainly makes sense,” trustee Kevin Price said.
Trustee Ken Smith believed that McTarnaghan’s feelings on FGCU’s time to degree were moving the conversation to the right direction.
“I think Dr. McTarnaghan is gearing the conversation toward the right causes (sic),” Smith said.
Delete Image
Align Left
Align Center
Align Right
Align Left
Align Center
Delete Heading