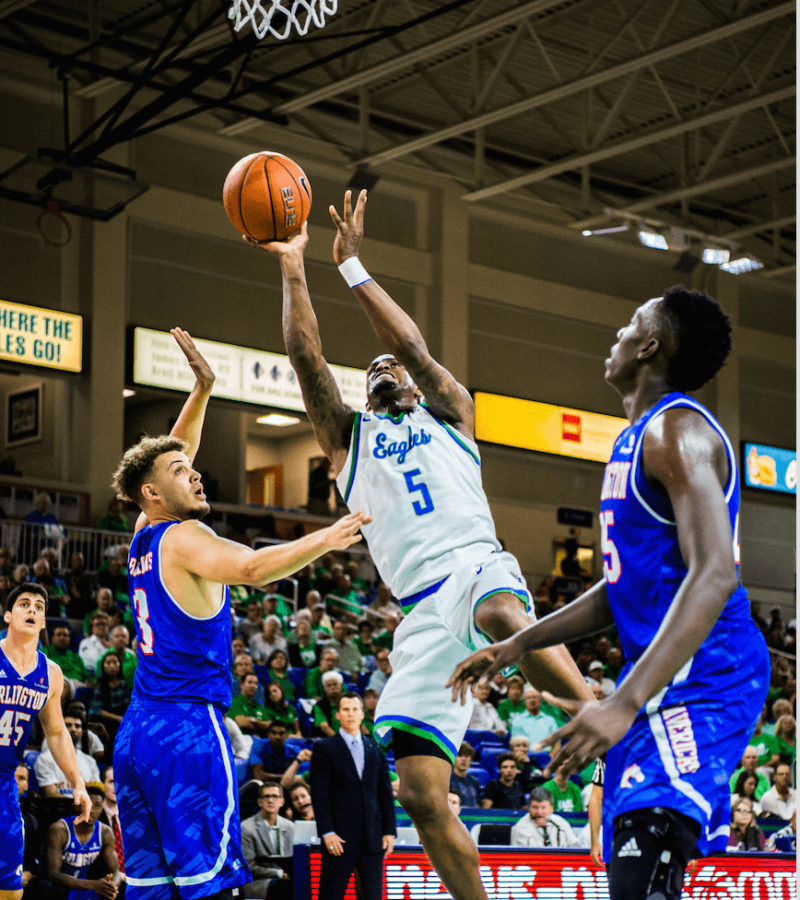 Coming off of a comeback win after trailing by eight points in the final 90 seconds of play against Stetson, the FGCU men’s basketball team secured its second ASUN conference-play game of the season in dramatic fashion with a 78-75 victory over Kennesaw State.
Trailing by as much as seven points midway through the second half, the Eagles fought back to tie the game at 68 with five minutes left to play. Just moments later in his return to the hardwood after missing the previous six games for personal reasons, Marc-Eddy Norelia gave FGCU a lead they would maintain for the rest of the game.
With heavy defense on the inbound, Tyler Hooker had the chance to send the game to overtime for the Owls, heaving up a shot from the top of the arc with two seconds remaining, but Zach Johnson emulated his game-sealing block against Stetson in the ASUN championship last year, and sent Hooker packing to seal the Eagles second-consecutive road victory and sixth-straight win.
“We scored a lot in the first half, but we didn’t have a lot of pop and couldn’t get in a rhythm,” FGCU head coach Joe Dooley said to FGCU Athletics. “Defense has been a staple of ours, and that’s something we haven’t been executing well enough of late, but we’ll figure that out. We certainly have plenty to improve, but at the end of the day it’s another road conference win, and those are always hard to come by.”
Despite not playing for nearly a month, Norelia shined in his return to the court, scoring 21 points on 9-13 shooting in just 25 minutes of action while grabbing six rebounds and dishing out three assists.
Joining Norelia in double figures, Demetris Morant continued his stellar season on both ends of the floor, securing a double-double, scoring 13 points and snatching 12 rebounds.
After missing 12 games last season, Morant has grown into one of the most consistent players on both ends of the court for the Eagles, averaging 10.1 points per game and 7.7 rebounds per game.
Brandon Goodwin finished with 20 points for the second-consecutive game, marking the sixth time this season the Norcross, Georgia native has finished with 20 or more points. Rounding out a quartet of FGCU players who finished in double digits, Johnson finished with 14 points and dished out four assists to compliment his game sealing rejection.
Averaging the second-most points per game in the country with 42.6 trailing only Kentucky, the Eagles finished with 50 points in the paint for their third consecutive game and their fourth in the last five contests.
Despite the Owls having a trio of players who finished with 20 plus points, the Eagles shot 57.9 percent from the clip en route to their 12th straight victory over Kennesaw State. FGCU’s streak is the longest active streak against an ASUN conference foe and is tied for the second longest win streak in conference history.
The Eagles will now head to Nashville, Tennessee, to take on Lipscomb in the final game off their three-game road trip on Saturday, Jan. 14 at 5 p.m. In a battle of ASUN unbeaten, the Bisons come into their matchup against FGCU at 2-0 in ASUN play, after defeating Stetson 94-68 on Thursday.