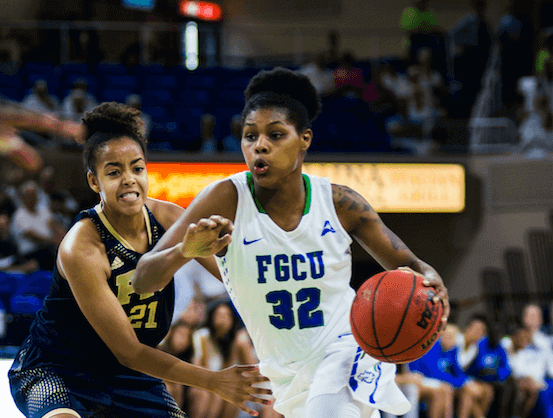 To start off Saturday’s double-header, the FGCU women’s basketball team came out strong, earning their seventh-straight win over Lipscomb, in a 90-63 victory.
With the victory, the Eagles remain undefeated against Lipscomb with a 19-0 all-time record.
The Eagles went 34-63 from the floor for a .540 shooting percentage, which marks their best shooting performance of the season.
FGCU’s shooting performance was impressive, with four players reaching double-figures in the game. Rosemarie Julien led the team with 17 points, followed by China Dow with 16 while Erica Nelson and Haley Laughter each tallied 12.
The Eagles earned a .522 three-point shooting percentage after landing 12 three-pointers. This was highlighted by Laughter who contributed heavily, making 4 out of 5 from the perimeter.
Defensively, the Eagles were also dominate, forcing Lipscomb to turn the ball over 22 times on the afternoon.
FGCU went on a 4-0 run early on in the game, but the Bison answered with five straight points, giving Lipscomb their only lead of the game.
The teams went back and forth the first 14 points of the second quarter, however, the Eagles took control halfway through the quarter with a 10-point run. FGCU went into halftime up by 16 after a layup from Jessica Cattani.
To start the second half, both teams came out strong. FGCU went on a 6-2 run, but the Bison responded by scoring 10 of the next 12 points.
A 9-3 run from the Eagles was highlighted by four-straight points from Mikala McGhee, and from there the Bison were unable to stop FGCU. The Eagles finished the quarter with an 81-53 lead and didn’t stop there going into the fourth.
FGCU went on a 4-1 run, which eventually led into the night’s largest lead. Trailing by 31, the Bison scored six-straight points, but in the end wasn’t enough to stop the Eagles.
Next, the Eagles will travel to Kennesaw, Georgia to face off with Kennesaw State on Monday, Jan. 16 at 12 p.m.