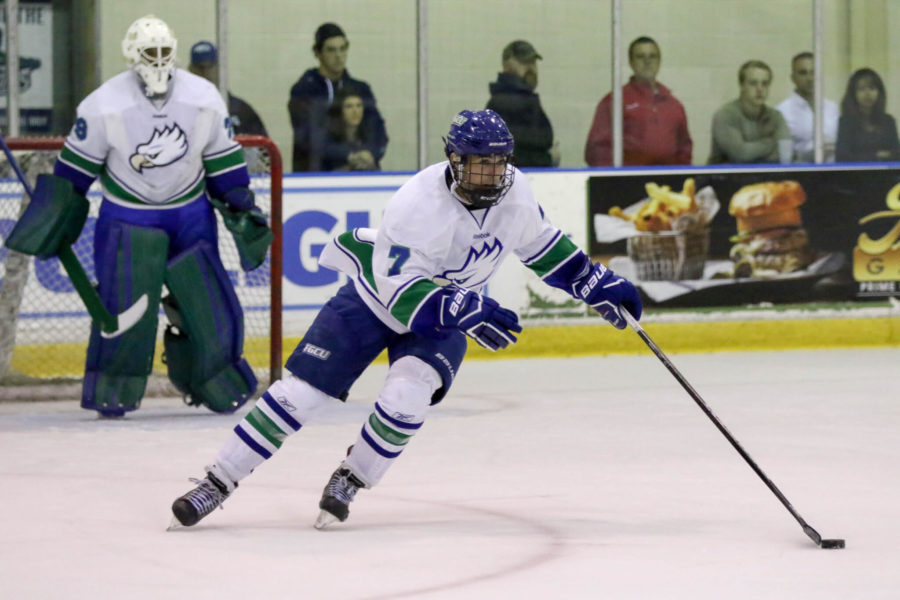 The Eagles were at home for the last time to take on the Michigan State Spartans, before their second road trip of the season. The Eagles added to their win column on both Saturday and Sunday, picking up   4-3 and 7-3 victories over the Spartans.
Friday night, Tyler Tracy would man the crease for the Eagles, stopping 30 of 33 shots for his first win of the new semester. Newcomer, Ty Lasker, picked up three assists on the night, showcasing his passing ability. The Eagles spread out its offense with goals coming from six different players, but assist captain Michael Chemello was able to find the back of the net twice with back-to-back goals. Scoring four of their seven goals coming on their potent power play, the Eagles were able to cruise to a 7-3 win.
Saturday night was much like Friday as the Eagles’ offense pushed them to a 7-4 win. Bradley Rambhajan picked up his 11th win of the season, denying 21 of 25 shots on net. The Eagles would explode in the first period with four goals after the Spartans were able to get on the board first. The Spartans would get back within one in the third, but the Eagles were having none of it, scoring two more goals to extend their lead to 7-4 a lockdown of their defensive zone with the help of Rambhajan in net. Three players would score 2 goals apiece for the Eagles (Leonard, Klotz and Wong). Shawn O’Meara would score the other goal for the Eagles, picking up his second goal since being added to the team at the start of the semester.
The Eagles travel to Ohio this weekend to take on their biggest challenge of the season, taking on Grand Valley State on Friday, Davenport University on Saturday, and Lindenwood (Belleville) University on Sunday.