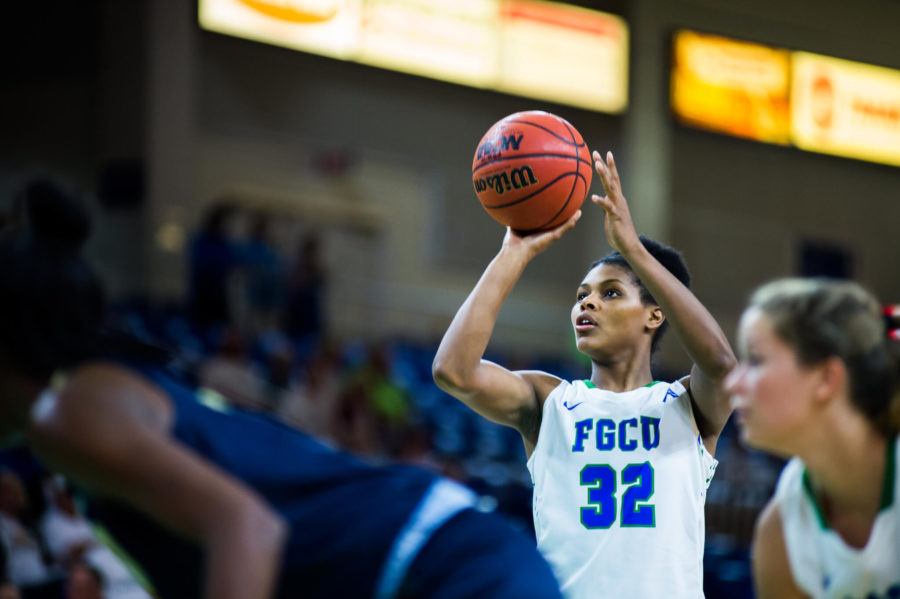 Coming off of 90-63 victory over Lipscomb behind Rosemarie Julien’s 17-point performance, the FGCU women’s basketball team closed out its three-game road trip with a 75-56 victory over Kennesaw State.
Moving to 3-0 in ASUN play with their victory over the Owls, the Eagles rode a 22-7 run in the third quarter to propel themselves past Kennesaw State after coming out of the half tied at 30. FGCU has looked more comfortable in the second half of play through the campaign, averaging 45.3 points in the second half compared to 37.7 points in the first.
“We went on a nice run in the third quarter,” FGCU head coach Karl Smesko told FGCU athletics. “We defended better and rebounded better in the third quarter, and that helped us get out in transition and get a couple of baskets that took us from a tied game to a 10-point lead.”
Tytiona Adderly led a quartet of FGCU double-figure scorers with her first double-double of the season. Adderly scored 10 points and snatched 12 rebounds en route to her double-double, as well as dishing out three assists and coming away with two steals.
“I thought Tytiona was outstanding,” Smesko told FGCU athletics. “I thought she provided the toughness for us inside. She did a tremendous job on the boards and then she found some opportunities to contribute scoring-wise. That was definitely the bright spot for me, seeing how well she played today”
Following her 17 point performance against Lipscomb, Julien scored 13 points while grabbing a career-high six rebounds. Tying Julien for the game high in points, Haley Laughter knocked down 13 points in just 16 minutes on 5-8 shooting from the floor. Erica Nelson rounded out the Eagles’ double-figure scorers, scoring 11 points while dishing out four assists.
Beginning the game on a 5-0 run, FGCU allowed five straight buckets from Kennesaw State before China Dow knocked down the first shot from long range on the night to give FGCU an 8-5 lead. Despite tying the game up at 13 after the Owls went on an 8-2 run, four turnovers in the final three minutes of the first quarter sparked a 20-13 advantage for Kennesaw State at the end of the first.
Scoring nine unanswered points to recapture the lead at 22-20, both teams traded buckets and traded leads tying the game four times before both teams went into the half tied at 30.
Allowing the Owls to score three straight buckets out of the intermission, FGCU went on a 19-1 run propelled by three-pointers by Gradinjan and Nelson, to hold a 15-point advantage heading into the fourth quarter.
Trading shots from long range to begin the final quarter of play, a layup and one from Adderly ignited an eight-point Eagles’ run, giving them their largest lead of the game 63-42. FGCU was able to hold off the Owls scoring six of the final 11 points of the game, sealing its third consecutive ASUN victory and its eighth straight win 75-56.
FGCU will now return to the nest for a three-game home stand, kicking off its home stand on Saturday, Jan. 21 against NJIT at 4 p.m. at Alico Arena.