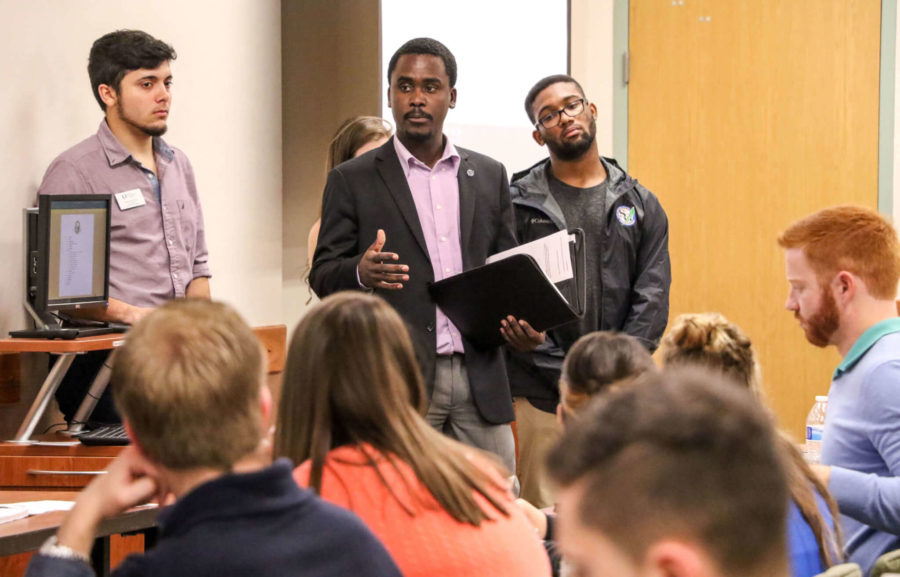 Student Government members came together during their second meeting of the year in Cohen Center 247 on Tuesday, Jan. 17.

The meeting kicked off with a presentation by Sandra Pavelka, vice president of the FGCU Faculty Senate and political science and public administration professor.

Pavelka discussed the importance of timely graduation for students among other topics relating to education and mentorship.

During the executive report, vice president Emmalynn Green brought to SG a selection for the new Chief of Staff. Senate voted previous senator Maddie Quinn to the position after a roll call vote.

Shortly after SG saw the entrance of two bills that were presented in their first reading.

In addition, $120,000 is being left aside for RSO travel funds. The total remaining amount in the budget is $5,545, a significant lower number than the previous year’s remaining total.

More details will be provided during the second reading, set for Tuesday, Jan. 24, where senate will vote on whether or not to implement this budget.

Next on the agenda was 1617-023, a bill proposed for the allocation of funds to the Caribbean Student Association.

The bill details a request for $3,350 for a variety of promotional items such as t-shirts and wristbands, and several planned events such as a “Lock-in,” Karaoke Night, Coffee with a Cop and a Caribbean potluck which will include decorations, paper ware, cups, $350 for food and $600 for an item called “Island Escape.”

The RSO meets six times per semester, or twelve times per year.

Parsons first raised concern over the lack of a budget being formally submitted in two years, even though the RSO has been on campus since 2010, to which the presenting senator was unable to address.

A representative from the RSO could not speak on behalf of that action.

Senator Ryan Denson was also confused regarding the name of the “potluck” in the aforementioned events. It was cleared that the RSO plans to change the name as they have plans to have the event catered.

The bill will be reviewed and voted on in the upcoming meeting.

Participants will leave early morning on Wednesday, Jan. 18, and will travel by bus.

Students attending the inauguration will be returning on Sunday, Jan. 22 and will have the opportunity to tour the capital.