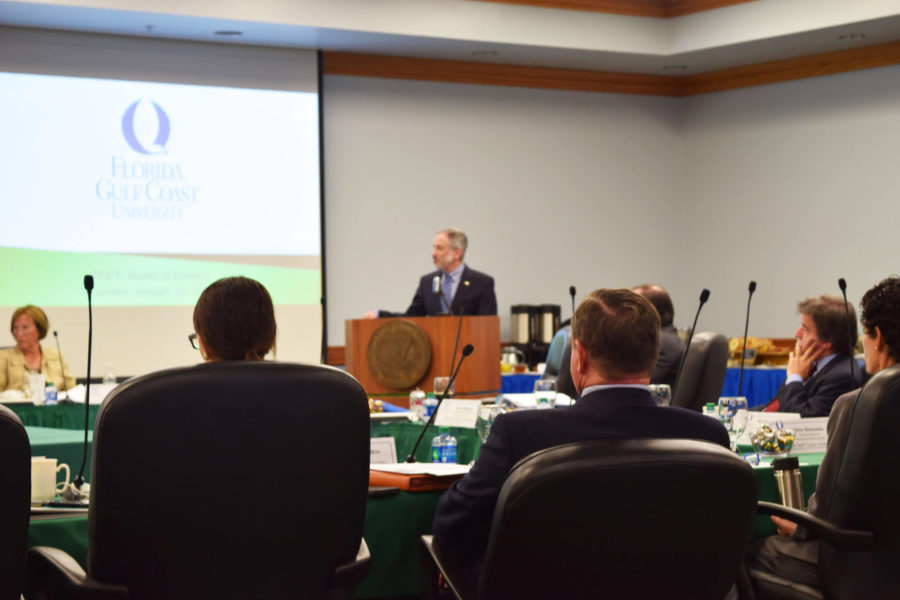 At the Tuesday, Jan. 10 Board of Trusteees meeting, it was revealed that FGCU first-time-in-college students’ GPA, SAT and ACT scores have risen steadily in the past few years.

ACT scores increased correspondingly, as scores averaged at 24.1 compared to 23.9 in 2015, yielding an academically competitive year for FGCU.

In the fall of 2016 alone, only 7,374 students were admitted out of 13,627 applicants. It is projected for the fall semester of 2017, only 2,500 students will be admitted into the university, according to Director of Admissions Marc Laviolette.

With a high demand in applicants, admissions officers are compelled to be selective and choose more academically prepared students. Applications are reviewed to see if candidates meet university criteria.

To apply, students must have their academic units completed along with a minimum 3.0 GPA, 1070 SAT score, foreign language credits and an ACT score of 21.

Admissions officers examine other factors in addition to test scores and GPA.

“We look at how well they did in core classes, if they’ve taken AP classes,” Laviolette said. “Even if they’ve submitted other documents like a resume or a letter of recommendation.”

Embellished resumes paired with impressive test scores do not necessarily declare success in terms of admission, as one element in a student’s academic career speaks louder than the rest.

“GPA is a better predictor in student success than a test score,” Laviolette said.

High test scores and GPAs are critical factors when applying for merit scholarships.

In the past year, there has been an increase in merit scholar presence on campus.

Augmenting merit scholarship levels provides a greater opportunity for students to obtain one, explaining the surge of merit scholars on campus.

Students are not alone in having to adapt to ever rising standards. According to Laviolette, FGCU is growing on a state level. For the first time in FGCU history, the university is competitive to other state schools affecting enrollment and scholarships.

According to Laviolette, USF is a major competitor this year particularly due to the football team’s success. Consequently, FGCU may lose up to one percent of potential students.

Financial packages change accordingly in efforts to adapt in a competitive environment.

“You never know how it’s going to go from one year to another; I get thrown various surprises,” Laviolette said.