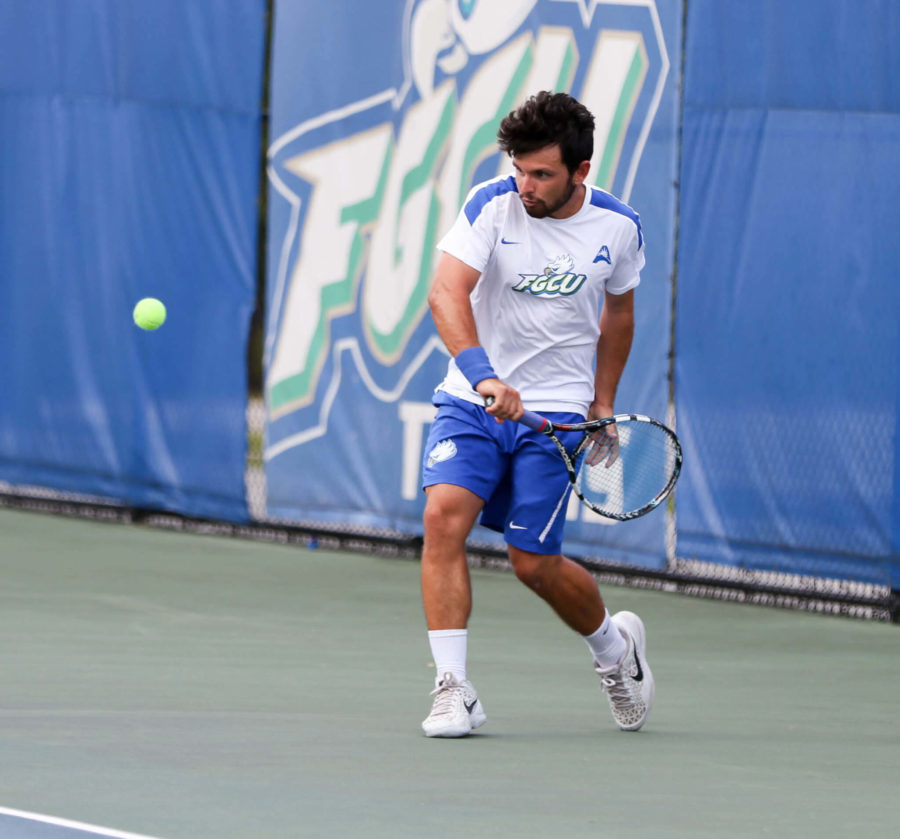 The FGCU men’s tennis spring season got off to a rough start as the Eagles lost two doubles matches to Wisconsin during the first day of their Spring Invite.

The Eagles only doubles win came from Javier Fernandez and Austin Bates, who defeated Osgar O’Hoison and Darius Mackenzie, 7-5.

Unfortunately, the duo teams of Oliver Landert and Ezequiel Cerrini along with Andres Alfonzo and Mateo Ruiz also suffered tough loses to the Badgers.

During the second day of play, the team earned three singles wins and a doubles win.

Playing with more intensity, the Eagles held early leads in doubles on all courts. However, the duo of Ruiz and Landert would be the only win against Louisville, claiming a 6-2 win over Christopher Morin-Kougoucheff and George Hedley.

However, the momentum could not roll over to court one where Alfonzo and Cerrini lost 6-4 to the Cardinal’s top team of Sean Donohue and Parker Wynn.

At the same time, Fernandez and Chaffin were in a similar situation; going ahead, but then fell 6-4.

Fortunately though, FGCU’s energy came back alive in singles play where Ruiz defeated Santiago Salazar 6-3, 6-4, while at the same time, Chaffin dropped a 6-1, 6-3 decision to Clement Filho.

After two long matches, Landert and Alfonzo also dropped their matches. Landert dropped a 6-2 first and a 6-4 second set.

Fernandez closed day two with a three-set win for the Eagles. After dropping his first set 6-1, the sophomore won the second 6-4 before closing out the match with a 7-5 third set win.

FGCU finished up the play at the Spring Invite Sunday with No. 25 USF. The Eagles fought hard against the Bulls, forcing many close matches but unfortunately, came up short.

In each of the three doubles matches, the Eagles came within points of turning 6-4 defeats into tiebreakers or wins.

Alfonzo and Cerrini faced Sasha Gozun and Vadym Kalyuzhnyy of USF, but the Bulls broke the Eagles serve at 4-4, eventually winning 6-4.

Similar to court one, Landert and Ruiz were facing Justin Roberts and Peter Bertran, losing 6-4 to the USF duo as they pulled away late in the match.

Fernandez and Bates suffered similar outcomes, remaining close the entire match, but ended up suffering a loss the next two games.

Chaffin fought hard in singles play, battling Roberts in the first set, but falling 6-4 and eventually falling 6-2 in the second set.

Ruiz also suffered a loss to Pierre Luquet 6-2, 6-1 in a powerful match while Landert dropped his first set 6-4 and ultimately fell 6-3 in the second.

The final match of the invite was a show-worthy one, as Fernandez took on USF’s Jakub Wojcik. After losing a tiebreaker in the first set, Fernandez came back to claim the second set 6-4. Unfortunately, Wojcik came back to force a tiebreak, taking the match.

Next, FGCU will travel to Tallahassee on Friday, Jan. 20 to face Florida State at 2 p.m.