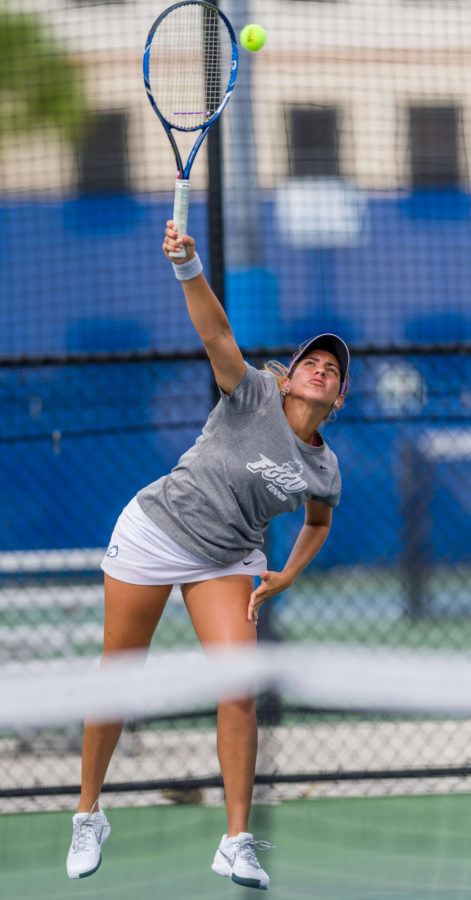 The FGCU women’s tennis team started its spring season off with an impressive performance at their annual FGCU Spring Invite.

FGCU began their tournament with matches against St. John’s and Northwestern State.

However, the Eagles then dropped back-to-back matches with Sara Kelly and Bridget Forster falling, 6-4, and Laura Falceto Font and Sofia Perez dropping their match, 6-3.

FGCU came out of intermission with four straight-set wins against Northwestern State to start singles play.

Ascua defeated Vladislava Litvinova, 6-3, 6-3, while Breana Stampfli and Maja Ornberg finished their matches with a pair of 6-1, 6-4 wins.

Curtis also won her first set against Emilija Dancetovic in a tiebreak, 7-6 (7-5), before dominating a 6-0 win in the second set.

FGCU faced Utah in the doubles play on day two of the tournament. Also, the Eagles played St. John’s in singles, winning six of eight matches against the Red Storm.

Unfortunately, that was the only doubles win for the Eagles for the rest of the day.

With loses from Stampfli and Ascúa, but wins from Curtis and Kelly, the Eagles ended the second day of play on a positive note.

Even with a change in the doubles and singles lineup, the Eagles still managed to secure two of three wins against Northwestern State in doubles, and also took five of eight matches against Utah in singles play.

FGCU’s top duo of Ascua and Curtis earned a 6-4 victory against Northwestern State’s Ivanova and Litvinova.

Unfortunately, the freshmen duo of Forster and Kelly suffered a 6-3 loss to St. John’s after winning against a tough Utah team Sunday.

Stampfli, Kelly and Ornberg controlled all of their singles matches against Utah, earning straight-set wins.

Forster moved up to play on court three but unfortunately suffered a 6-0, 6-3 loss to Utah’s Alexia Petrovic.

Next, the Eagles will remain at home to host USF on Sunday, Jan. 22, at 2 p.m. at the FGCU Tennis Complex.