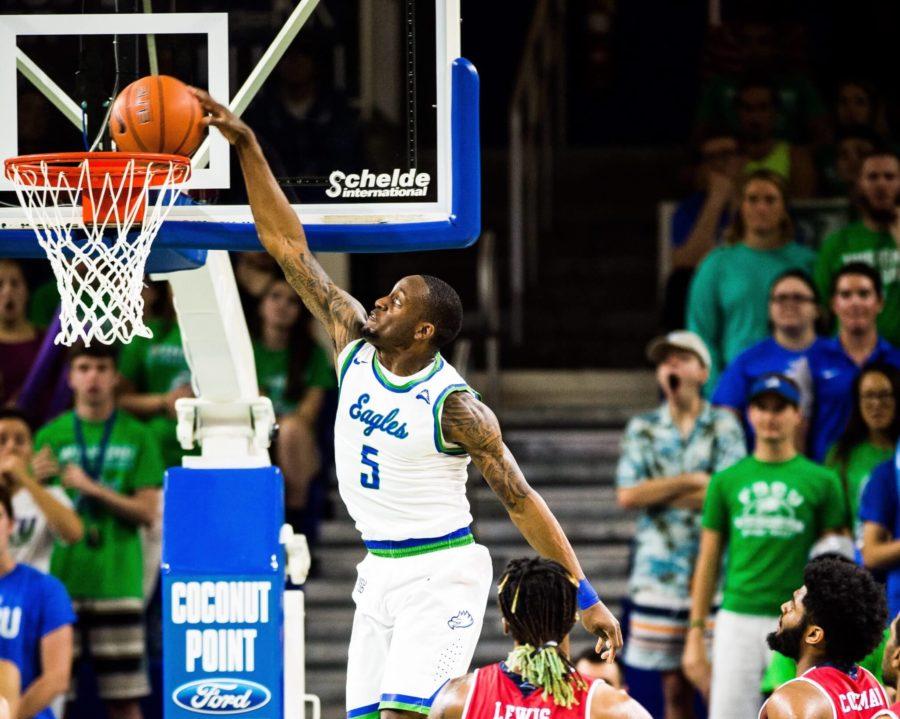 Coming off of its first loss in ASUN play falling to USC Upstate 62-60, the FGCU men’s basketball team defeated NJIT 84-71 en route to moving into a three-way tie for first place in the ASUN.
Leading a quarter of double-figure scorers, The Eagles’ backcourt of Brandon Goodwin and Zach Johnson propelled FGCU to its 15th victory of the season, scoring a combined 40 points.
Rayjon Tucker added to the backcourt’s strong performance with 16 points on a perfect 5-5 shooting from the clip. Christian Terrell rounded out FGCU’s double-figure scorers scoring 12 points and tallying four assists.


The Eagles are now 5-2 when Goodwin scores 20 or more points, following his 21 point performance against NJIT.
“We got off to a great start and really pushed the tempo,” FGCU head coach Joe Dooey said. “We were playing pretty well and then got into where we really took away our own momentum by forcing some shots but we’ll get that figured out. We did a better job defending in stretches tonight as well which helped.”
Following an 11-point performance against USC Upstate, Antravious Simmons only played two minutes against the Highlanders after suffering an injury in the first half.
The Highlanders played the majority of the game without leading scorer Damon Lynn (averaging 21.7 points per game) after he sustained an injury in the first half.
Coming into the matchup ranked second in the nation behind Kentucky in points in the paint, averaging 42.7 per game, the Eagles got rolling in the paint early, slamming home four dunks in the first seven minutes en route to holding a 19-point, 34-15, lead before going into the half up 41-30.
Playing behind for most of the first half, the Highlanders cut their deficit to just four, 47-43, with 13 minutes left to play in the second half.
Sparking a 23-9 run to an 18-point lead, the Eagles rode their double-digit lead to their first double-digit victory against an ASUN opponent.
Shooting 53.6 percent from the field while shooting 33.3 percent from long range, the Eagles outscored the Highlanders 19-0 in fastbreak points.
With their two-game home stand in the books, FGCU will head to Jacksonville to face one of the three teams tied for first in the ASUN, UNF, on Wednesday, Jan. 25, at 7 p.m.
Delete Image
Align Left
Align Center
Align Right
Align Left
Align Center
Delete Heading