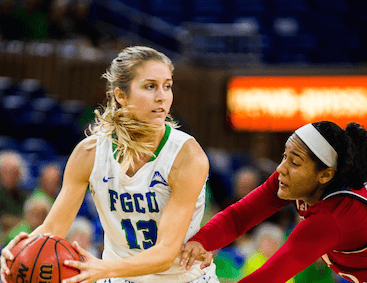 The FGCU women’s basketball team overcame an early first-half deficit to defeat NJIT with a score of 73-53. With the win, the Eagles remain undefeated in conference play and move 10-0 at home.
Despite the rest of the team, Haley Laughter dominated in the first half with four triples, finishing the night with five threes and a team-leading 20 points.
Jordin Alexander and China Dow also helped offensively, reaching double-figures with 12 and 13 points on the night.


Defensively, Adderly dominated the boards with a career-high 16 rebounds. Even trailing by 11 points in the first quarter, FGCU showed great ball control, committing only five turnovers, while forcing NJIT to 17.
Things went downhill quickly for FGCU as they fell 15-4 in the first quarter. However, in the final minutes of the quarter, Laughter, Alexander and Taylor Gradinjan, combined for 12 points.
Luckily, Laughter saved the Eagles with a three, allowing the team to only trail by one to start the second quarter. Tying briefly at 25, Dow grabbed an offensive rebound to add two points and a foul.
Unfortunately, the Eagles went scoreless in the final minutes of the quarter, finishing the half with a 33-27 deficit.
With the intermission over, the Eagles came out a much stronger team in the second half. With Nelson and Alexander getting involved early, combining for 13, FGCU was finally regaining control.
Pulling ahead with a 45-43 advantage, FGCU finished the 30-point third quarter with a 57-46 lead.
From there, the Eagles continued their dominance. Once going on an 11-0 run, there was no stopping FGCU, as the Eagles downed their 13th three of the night, giving them a 73-53 win over the Highlanders.
Next, the Eagles return to Alico Arena to host USC Upstate Monday, Jan. 23 at 7 p.m.
Delete Image
Align Left
Align Center
Align Right
Align Left
Align Center
Delete Heading